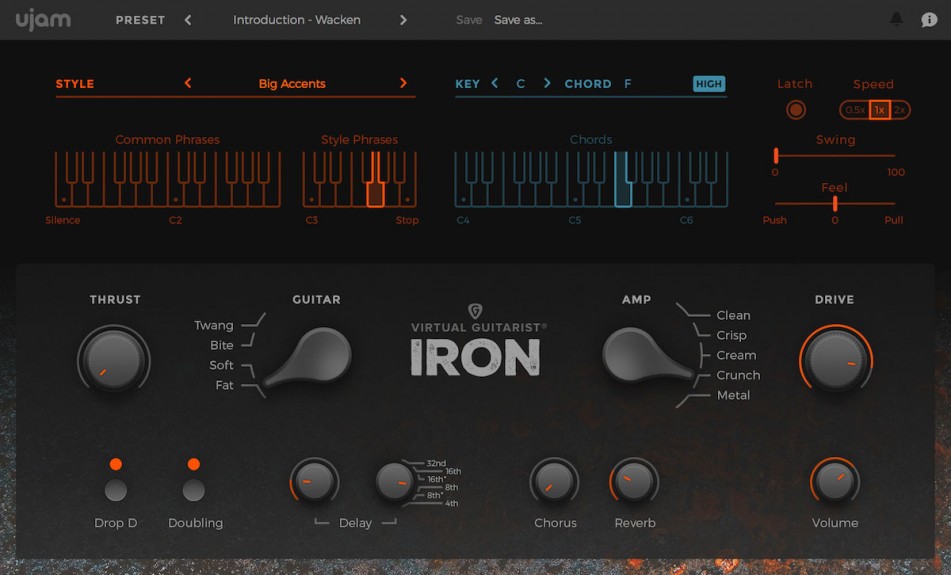 Music technology powerhouse UJAM, mainly known for its advanced music cloud solutions, announces the rebirth of Virtual Guitarist. Virtual Guitarist was the first and best-selling virtual instrument that brought realistic-sounding rhythm guitar tracks to computer-based musicians worldwide. Now the core team behind the original Virtual Guitarist has re-united to build a new generation of virtual instruments that don’t rest on the success of the past, but continue innovating with vastly increased realism, flexibility and sound quality, thanks to an entirely new technology and content concept.

UJAM has released IRON as the first instrument in a series of Virtual Guitarist products, each a unique guitarist personality with its custom playing style and setup. IRON provides a rock- and heavy-centric set of guitars, amps and styles. A second installment of the series featuring steel string acoustic guitars is slated for spring 2016.

Peter Gorges, UJAM Co-Founder and Chief Visionary Officer, says: “Virtual Guitarist IRON is your studio companion, always on call to help you write, play and record powerful guitar tracks. Take seat in the producer’s chair and tell your player what you need. Real professional guitarist performances on a special custom-built vintage guitar have been captured and integrated with UJAMs new virtual instrument engine.”

On top of the entirely new engine and content, UJAM focused on ease of use and user experience beyond the instrument itself. Axel Hensen, Co-Founder & CEO, has this to add: “We realized that while there are many great virtual instruments and plug-ins out there, many users are not content with the experience outside the actual product. That’s why we went the extra mile and built a user service platform from the ground up, delivering a frustration-free experience – no dongle, super-easy registration, automatic updates – just what we as users would expect in 2015.”

IRON comes with 6 GB of uncompressed content. It offers more than 100 styles and over 1100 phrases that can be played in real-time – using keyboards and other controllers – and flexibly adjusted to any song. IRON also allows for customizing the guitar sound dramatically with a wide range of pick-up and amplifier/cabinet combinations.

“We have built IRON with musicians in mind. Don’t know about guitar voicings? No idea how to set up and record the amp and cabinets? Have no fear – we designed IRON to be fail-free, and you can always trust it to sound great no matter how you set it up.” says Paul Kellett, Principal Engineer and UJAM’s music technology mastermind.

Virtual Guitarist IRON is currently available as an AU and VST plug-in. UJAM announced to ship Pro Tools’ AAX format as a free upgrade in February 2016.