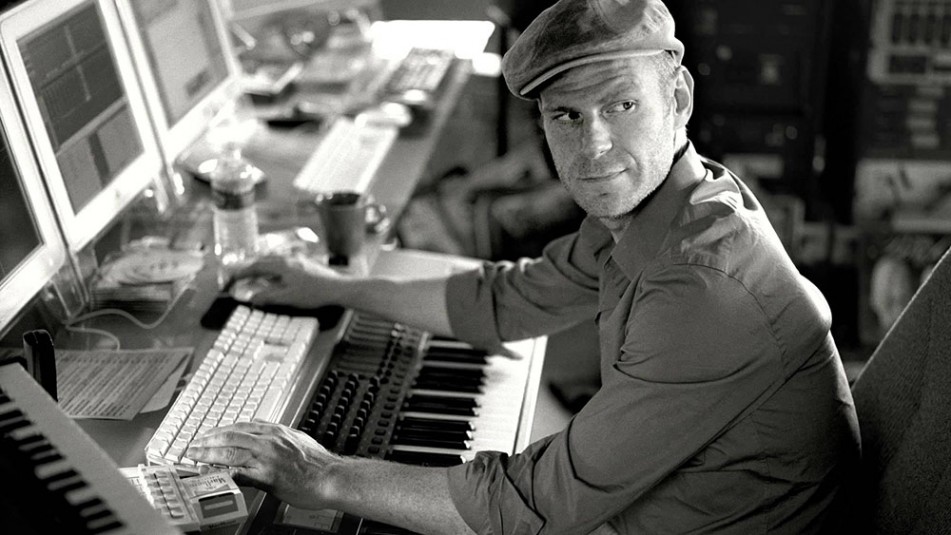 f w
h
fFacebook wTwitter gGoogle+ pPinterest
Tom Holkenborg, also known as Junkie XL or JXL, is one of the top film composers working today, and he took a unique route to get there – aided in part by the sourcing power and expertise of Guitar Center Professional (GC Pro), the business-to-business (B2B) division of Guitar Center providing highly customized service for professional accounts.

Having achieved worldwide success as electronic artist Junkie XL, licensing music to video games, films and commercials, and topping the charts in 24 countries with his remix of Elvis Presley’s “A Little Less Conversation,” he decided it was time for a change. Twelve years ago, the Dutch multi-instrumentalist, remixer, producer and engineer relocated to Los Angeles to add a “film composer” credit to his name. And the move was attempted somewhat naively, admits Holkenborg. “I came here and said, ‘Let’s score movies!’ I sat in with Harry Gregson-Williams — still one of my favorite film composers — and saw how he worked, how he combines the orchestra with other elements, and how he dealt with meetings with the studios, and I realized that it is not as easy as it looks.”

So Holkenborg decided to take a back seat, working as an assistant for various composers while also composing music for projects as they came. And more and more came in, and Holkenborg steadily built a reputation as one of the hardest-working and talented composers in Hollywood. By 2015, those 12 years of hard work have more than paid off, with composer credits on several major motion pictures: for example, Run All Night, Mad Max: Fury Road, Black Mass, Kill Your Friends, and Point Break just in 2015 alone. As 2016 gets underway, his music will be heard in Deadpool and Batman v Superman: Dawn of Justice, with more to come as the year progresses.

The point at which a film composer is brought into a project can vary. “I’m now working on a science fiction movie that comes out in a year or so; I got the script in March 2014. Fury Road I got almost two years ago,” he says. “But then there are movies like 300: Rise of an Empire or Black Mass that come in five weeks ahead. That’s a whole different set of challenges.” If no film has been shot yet, he says, “If you’ve got a script your head takes you to places that are not connected to the images yet. I start to think about the story and what would fit the characters and the movie.” Initially, he says, he would read a script, put it down, and immediately start working. But now, “I tend to take more time to think about it. At a certain point it starts playing in my head, which comes after years of making music. Then I start working.”

Holkenborg and his family recently moved into a house in L.A.’s San Fernando Valley, converting an entire wing into a series of studios, including his main writing and mixing room, which features two enormous modular synthesizers. “I’m particularly fond of rooms that have a liveliness to them, like this room,” he says. “When I mix here, at first it sounds very cluttered because of the reverb and slapback, but if I can get a mix really tight in this room then it will sound really awesome in a theater.”

As for a DAW, “I’ve been going between Cubase, Pro Tools, and Logic since the beginning of time. For the last three and a half years it has been Cubase. It’s been really wonderful; I’ve been able to build a massive template that runs really smoothly. The Cubase machine is a super-fast PC. Linked to that are six server units running VSL [Vienna Symphonic Library] Pro. Cubase comes with a ridiculous amount of plug-ins, so I pretty much have everything that’s available.” He continues, “The speakers are very important to me. I’ve had the DynAudio AIR 25s almost 14 years. They really work for me. I get good mixes out of them, and it’s a pleasure to listen to them for a long period of time.” Holkenborg also has racks of hardware, including a pair of early-1980s Yamaha REV7 reverbs and a Korg DRV-3000 multi-processor, but notes, “Outboard gear is essentially irrelevant when it comes to working in-the-box. But it’s super important when creating sounds or during recording.”

GC Pro has been a key partner throughout. Holkenborg notes, “I’ve known Derek Snyder [currently Director, GC Pro Business Development] at GC Pro for 14 years now. He has always had my back for any technical or gear challenge that I have faced. To have a relationship like that is very important to me. It keeps the creative energy flowing. Whether its guitars, amps, software or hardware, I always rely on his expertise.”

He has no standard approach to composing: “I love to be as original as I can. I usually end up with a score that is quite left of center.” But composing music for motion pictures is not like making a record, he stresses. “It’s not about the music, it’s about the film. Your prime responsibility is to enhance the film and come up with something that really fits the film.” Once he is confident with his direction and has some music recorded, Holkenborg sends what he calls his sketchbook to the film director. “As a music product it’s finished, but it’s a sketchbook in the sense that I want to show my ideas to the director. We’ll use that as a template. I’ll ask, do you recognize your movie in this? It’s not even to picture. We start a discussion. I’ll take chunks of the music and rework it to a scene and see the director’s response. It’s teamwork. There are people who think that the composer can determine what’s going to happen in a film score. That’s not true — the director steers the ship.”