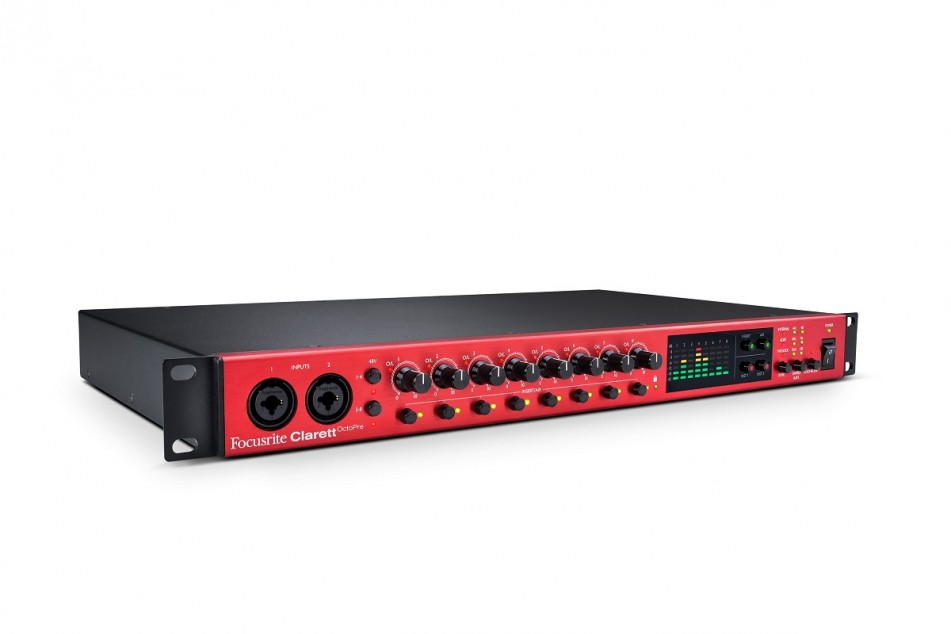 Focusrite has announced the launch of a new eight-channel mic pre/A-D/D-A, the Clarett OctoPre, designed to allow the rapid addition of eight mic/line inputs and line outputs with the company’s successful Clarett range of audio interfaces, or other interfaces that include ADAT optical I/O.

The Clarett OctoPre includes eight of the Clarett range’s ‘Air’-enabled mic pres: the ‘Air’ effect emulates the transformer-based sound of Focusrite’s ISA range of heritage mic pres. The preamps include extensive headroom, making them ideal for drums or other high-level signals. The rear panel inputs switch automatically between mic and line in and there are also two instrument DI inputs on the front panel. The ‘Air’ effect can be switched in or out on a channel basis and phantom power is also provided, switchable in two groups of four channels.

Each channel features a front-panel switchable relay-bypassed insert point allowing EQ, compression or other analogue processing to be left connected and brought into play with the push of a button. In addition to being fed to the A-D converter, the input channels are also available at the analogue outputs, from where they can, for example, be routed to a live mixing console while at the same time capturing the inputs digitally. The analogue outputs, which appear on a rear-panel DB25 wired to the AES59 standard, can alternatively be switched to pick up the ADAT inputs via the D-A converters.

Focusrite has been making digital conversion systems for years, and the Clarett OctoPre provides a level of conversion quality that matches that of the mic pres themselves, with precision digital conversion offering 24-bit operation at standard sample rates up to 192 kHz. The A-D converters measure a dynamic range of 118dB (A-Weighted); the D-A 119dB. Two ADAT input and two output ports are provided, allowing the Clarett OctoPre to carry eight channels of I/O at sample rates up to 96kHz and four channels at 176.4/192kHz. The Clarett OctoPre syncs either to external ADAT or Word Clock, or may be clocked internally, and features JetPLL™ jitter elimination. Word Clock out is also provided.

The Clarett OctoPre will be shipping in November and is available from dealers for $699.99.