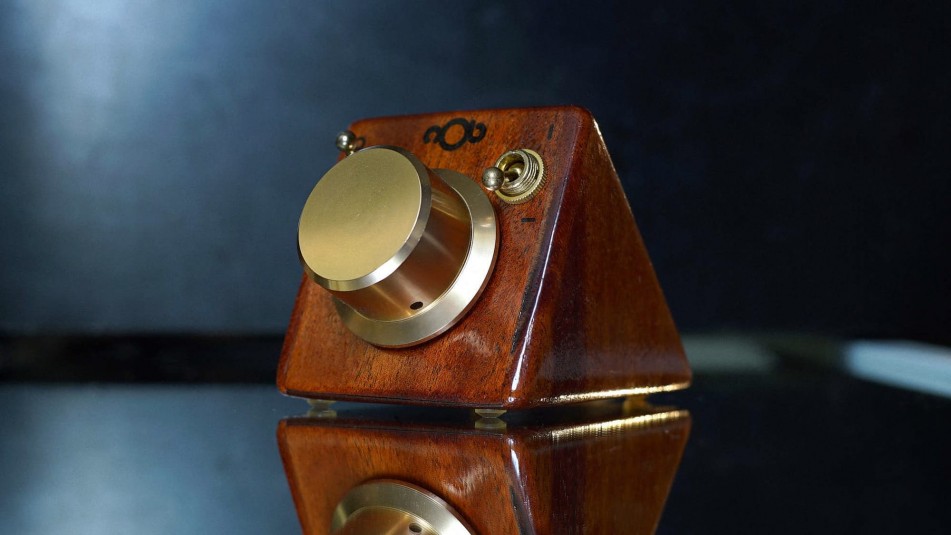 When I stumbled upon the Nob Control it was a Kickstarter project that reached its goal. I decided to back it since it looked to be like a very interesting project. It took about 8 months with monthly updates for backers from reaching the goal to delivery of the hardware units and I’ve been using it for a couple of months. There was hardly any learning curve and the usage feels very natural.

HID emulation
The Nob emulates a Human Interface Device (HID) which is a global standard for USB mice, keyboards and controllers. This means no drivers for any device you use it on that supports HID devices. So it’s instant plug and play with no hustle whatsoever. Easy to switch between PC, Mac, Linux, Laptop or Mac/Android Tablet. This also ensures that the hardware is independent from future driver support as long as the HID standards are supported.

Dial
The main feature of this unit is the massive weighted brass colored aluminum dial which runs very smooth. The comparison with a radio dial is spot on because it really feels like the radio dial of my parents Bang and Olufsen radio. It also has a much higher resolution that a mouse dial wheel or you dragging the mouse pointer. So you don’t have to double-click and enter the value manually because you can exactly dial in the value you are looking for. You also can tap the dial to undo or redo any edit.

Switches
As to it looks you can see it’s a handcrafted unit because of the switches are a dead giveaway. It also gives its charm if you care about esthetics. There are two toggle switches for the turn or drag mode and vertical and horizontal mode. You can temporarily toggle the operation mode by holding your finger to the switch while using the dial.

Manual
Since some of the features rely on touching the control with your fingers. It helped me to watch the instruction videos how to use the controls. Especially when it comes to the tapping and holding your finger on the switches that enables the ‘hidden’ features.

DAW
During the testing period I’ve tried a couple of DAW and they performed accordingly. Point with the mouse and dial with nOb is as easy as it gets. The one exception was Ableton Live that showed an oversensitivity to the dial.

USB
One thing I’ve noticed on the information sheet that came with the nOb it stated that extending the USB cable of 1.5m shouldn’t be more that 3m in total. That is the official statement made and no further experiments were made to extend the USB cable. As to the 1.5m it comes with it’s ok for desktops, laptops and tablets. If you have your DAW in another room and want to extend the USB more than 5m you may run a risk here.

New Orders
The team of nOb told me that they are planning on accepting new orders. Pricing will be slightly higher than the Kickstarter price of €150. They are also working on new software features and better support for existing applications.

Conclusion
There are various DAW controllers out there and whether you like to use them is often a personal choice. To that extend nOb doesn’t differ from this. As far the competitions goes this is a fairly simple but straightforward controller that is on par regarding pricing. No need for special drivers helps a lot. For me personally it has become an integral part of my studio where it sits on my desk ready to use when I want to use it. You most certainly can live without on and use the mouse instead. But if you want to use your both hands you can use one hand for the mouse and the other one for nOb. It’s not better or faster but just feels different.