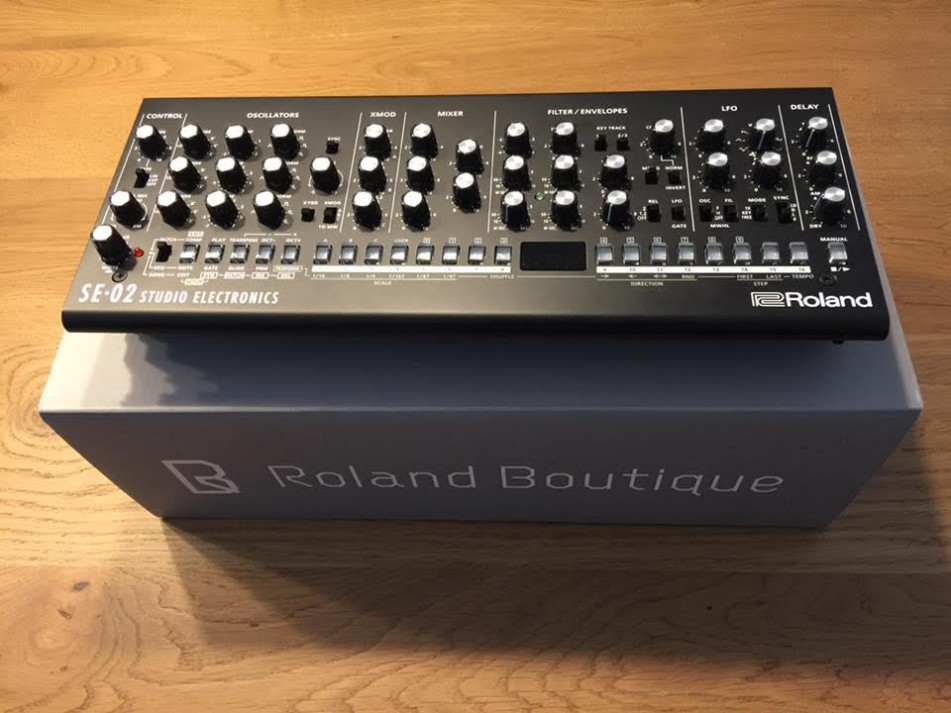 Introduction
Roland’s Boutique collection has been growing steadily over the last few years, mainly following the formula of taking a classic analog instrument from Roland’s rich heritage, modelling it digitally using ACB technology and then scaling it down into a casing that looks just like the original but several sizes smaller. The SE-02 is different. Not only is it an original synth design rather than a remake (although it’s obviously heavily inspired by the King of analog monosynths, the Moog Minimoog Model D), it’s also a fully analog monster rather than a digital emulation.

Features
Despite its small footprint, the SE-02 is a fully featured analog synth that has all the features you’d expect on synths that are far bigger and far more expensive. 3 VCOs with various cross modulation options, a mixer section with feedback and noise, a self-oscillating 24dB ladder filter, a VCA section, an LFO and a rudimentary digital delay engine. There’s even some CV/gate functionality to make it work together with your vintage, analog and/or modular gear.

A surprisingly elaborate step sequencer is also included which can be used to sequence notes, gate, glide and even a parameter setting. And a huge amount of knobs that reminds us of the classics of yesteryear; apart from some functions using the step sequencer buttons, this synth is almost fully one-knob-per-function. Which is no mean feat, considering the amount of functionality and small footprint of the unit.

Connecting the SE-02 to your PC or Mac using an USB cable will allow you to control the unit through MIDI but also to use it as an audio interface, directly streaming the audio through USB into your DAW, which is especially great when used as a portable unit.

Due to the analog circuits, more power is needed so unlike the other Boutique models, the SE-02 comes with an external power supply and it’s not possible to run the unit from batteries or USB bus power.

In use
Studio Electronics has a history of bringing tribute to classic analog synths of the early days. The SE-02 is no exception. While Roland is a bit silent on the sources of inspiration in its official communications, no doubt while glancing sideways at the legal department of some competing brands, Studio Electronics discloses on its site that various elements of the SE-02 have been inspired by Moog, Oberheim and Arp.

The sound is indeed most definite analog in nature; sometimes it seems the VCOs even have a hard time tracking keyboard input, although at the same time the tuning seems to be very stable – there’s hardly any of the drift you might expect from a VCO suffering from age or changing temperature. This odd combination of not-entirely good tracking with stable tuning doesn’t always feel right, although some people may actually find it adds a bit of a unique flavour to the sound.

The filter of the SE-02 is a ladder filter inspired by the Minimoog, but during the review it didn’t convince entirely. It seemed its range was a bit limited and the earth-shaking bass the Minimoog is known for was hard to replicate. Putting the SE-02 through an oscilloscope showed that there was very little action below the 50-60hz sub range. Hopefully this is a calibration issue caused by testing an early model of the synth, as there is definitely room for improvement here.

But those looking for the classic analog sound shouldn’t be discouraged: with some tweaking and hunting sweet spots it’s most definitely possible to recreate many classic sounds or create monstrous new ones. And thanks to the huge amount of knobs on the surface, dialling in new sounds is great fun and intuitive – once you get used to the small scale of the unit.

A fantastic addition to the SE-02 is the step sequencer, which combines some of the best features of the well-known x0x type sequencing with some tricks borrowed from other manufacturers. Not only is it possible to record notes and glide, you can also store parameter data per step, making it easy to create evolving sequences and glitch-like effects. Unfortunately there is no arpeggiator on board.

Size does matter
The amount of functionality Roland and Studio Electronics have managed to cram in such a small package is nothing short of amazing. To be able to grab this synth in just one hand, to easily store it with your laptop in your laptop bag and have it up and running in a couple of seconds by hooking it up through USB and plugging in the power adapter makes it an excellent travel companion. Compare that to ‘portable synths’ from previous decades and you just have to appreciate how far technology has come. And it looks really cute and desirable too!

At the same time, the small scale causes some issues. Knobs are really small and their position is often difficult or even impossible to read, especially in low light. This makes operating the unit often much harder than it should be. Also, when enthusiastically jamming using both hands, your fingers will get in the way of each other. Some of the selector buttons feel rather fragile due to their small size combined with rather stiff operation, although this might be because we were testing an early production model.

If playing a Minimoog feels like operating a 50s submarine, playing the SE-02 is more like operating a miniature travel edition of Battleship. The size dilemma is something to keep in mind when you consider picking this synth up – it may be a blessing if you need something small and portable, but a curse if you want optimal ergonomics and ease of operation. For a synth that has so many controls and was designed with hands-on operation in mind, the choice to go for the Boutique footprint feels like a gamble that, in this reviewer’s opinion, doesn’t entirely pay off.

Conclusion
The SE-02 is released in a price range that’s pretty crowded, even if you only consider the analog synths. It has a lot of things going for it – it’s a very complete package, has loads of hands-on control, a decent sequencer and it’s both small and lightweight, making it perfect to take it with you. On the other hand, the small size of the unit makes operating the synth less comfortable than larger models and clarity suffers due to the difficult to read knob settings.

When it comes to the sound quality, the SE-02 does sound like an analog synth, but it’s debatable if it succeeds in its aim to sound like a true vintage 70s synth. During two weeks of extensive testing the feeling that the sound was a bit dull and lacked a character of its own persisted. Of course this is highly subjective and your mileage may vary. So while the SE-02 may tick off all the boxes when you go down the spec sheet, hearing and feeling the synth and weighing up the pros and cons against its competitors is highly recommended before taking the plunge.