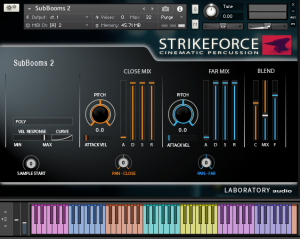 Introduction
StrikeForce is a Kontakt instrument that specialises in big, dramatic percussion. While cinematic sample libraries are ten a penny, StrikeForce not only brings the sounds, but also some great ways to expressively control them. The website of Laboratory Audio, developers of StrikeForce, is brimming with glowing testimonials by some of the biggest names in the world of movie soundtracks, but is StrikeForce a genuine blockbuster or more of a straight-to-video affair?

Overview
StrikeForce was created by two experienced soundtrack composers who wanted to create their own dream percussion library with all the features other libraries lacked. Apart from great sounds, playability has been the main drive for Laboratory Audio.

Coming in at a whopping 43GB of percussion samples (when uncompressed) spread over 129 instruments and 12 multis, this is a comprehensive set of sounds to score any mood, ranging from moody background drumming to stirring crescendos. The sounds range from tribal drumming to thundering subbooms, metallic hits and various whooshes and subtle percussion sounds.
StrikeForce supports NKS so it integrates well in studios that use Native Instruments controllers like the Kontrol keyboards or Maschine.

Functionality
StrikeForce has been built with playability in mind. Samples are laid out over the keyboard in a logical way depending on the source material. In most cases, every sound is laid on the same key over various octaves for different tuning. Per key a different “velocity sample” is then used, with the timbre getting brighter and louder the further you move upwards in the octave. Key velocity can then be used to influence the volume and attack per sample, adding another axis of expression. There is also a more compact layout at the low end of the keyboard, where the same sounds are stacked based on velocity only for a more traditional way of playing. The StrikeForce layout is far superior when it comes to expression and fun to play though, and is one of its main selling points.

Various round robin modes cycle through the various samples per note for an even more organic feel, although you can add robotic precision as well by narrowing the amount of samples used down. There are two settings that can be tweaked, the “close” and the “far” mix, with the mod wheel morphing between the two. There are also various sloppier samples available for stuff like flam effects, where the ensemble isn’t entirely synchronised. This adds a really organic and human feel to the percussion, although you will have to shift your note timing around a bit to make sure it sounds right.

The library is comprehensive enough to provide a myriad of options to suit any mood or atmosphere. While the library is huge and the playability is great, the option to customise sounds and kits is limited. The aforementioned “close” and “far” mix settings allow you to set panning, an ADSR and pitch per section and morph between the two settings using the modwheel, and there are some options to tweak velocity sensitivity and let it control the attack. But that’s about as far as customising and shaping the sound goes. There are also no options to change the sounds in the kits or build your own kits.

Reverb and EQ are ‘baked’ into the samples and can’t be edited from within the instrument. While this can be easily circumvented by bringing down the release times (to cut off the reverb) and processing the output using external effects, it would have been nice to have slightly more control of the timbre of the sounds in StrikeForce itself using a filter, EQ or controllable ambience. That said, the sounds are processed in such a way that they almost always sound their greatest “straight from the box”, and there is an argument to be made that in cases like this it’s actually preferable to have a completely tricked out library that can be processed using outside specialist tools rather than getting some mediocre samples and processing them through average built-in effects. But it’s something to keep in mind for the sound designers amongst us.

Conclusion
While clearly targeted at professionals scoring trailers, TV shows or movies (with a price to match), the playability and breadth of sounds make using this Kontakt Instrument so much fun that anybody interested in percussion and electronic music should take notice, especially if you’re into epic beats and want to look beyond the typical sounds of the classic drum machines or heavily processed EDM style sounds that populate most soundpacks, DAWs and drum machines these days.

If you’re in the business of making soundtracks for movies, trailers, commercials, games or TV you should definitely consider adding StrikeForce to your arsenal. With a bit of practice and thought it’s easy to get huge and very organic/realistic sounding percussion out of this instrument and we had loads of fun playing around with it and fully expect some of these thunderous drums appearing outside the world of movies, games and TV!