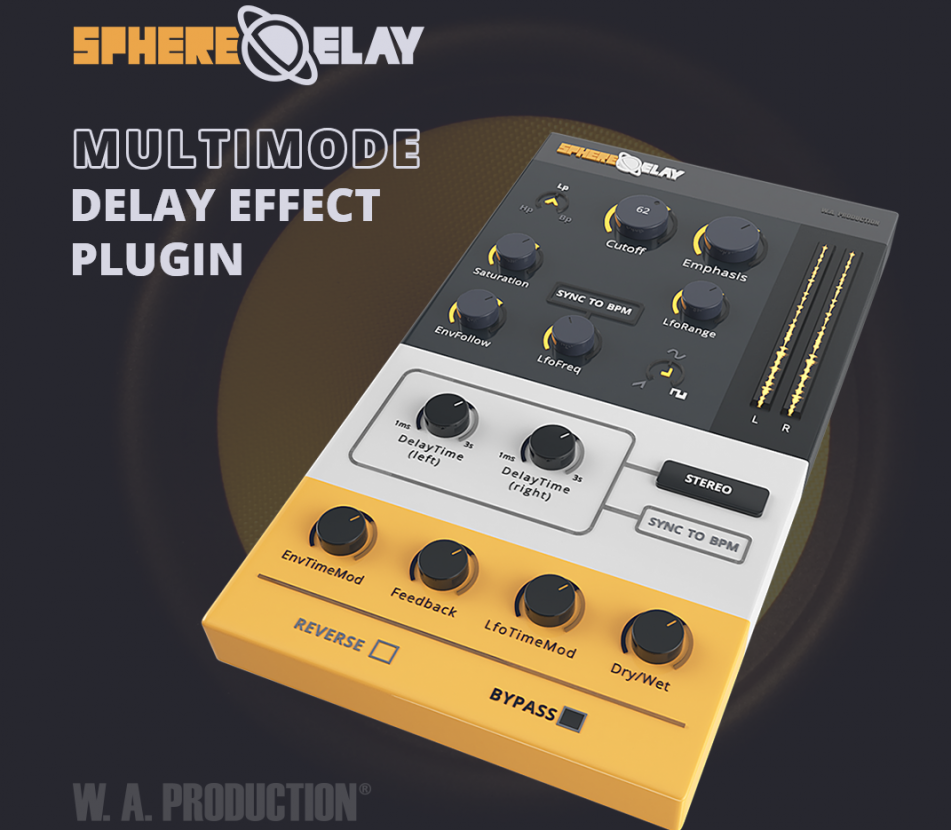 SphereDelay by W.A Production is an innovative Multimode Delay Effect Plugin developed for those who want something more when working with effects. No longer will you have to rely on basic Delay presets found inside your DAW.

All of the above in a single delay plugin will spice up your instruments and add new depth and dimensions to your mix. SphereDelay comes with an incredibly sleek design with an interface that pops out and makes navigation easy and fast. The idea behind SphereDelay was to allow users to get into customising their Delay effects. We understand Delay can be an essential part of a track or in general as an effect. Allowing customisation in an effect like Delay can allow its users to create a personalised and unique sound.

4 Delay Modes
SphereDelay comes with four different Delay Modes that each have their way of shaping and affecting the Delay signal. The four modes are; Mono, Stereo, Ping Pong and Ping Pong Separate.

In Mono-mode the delayed signal is sent to both outputs at the same level making it heard from the middle of the stereo image (right between your speakers).

Delay Time Modulation
SphereDelay has Delay Time Modulation and in each delay mode, the delay time can be modulated with the LFO and the Envelope follower to create a variety of unique effects. This tool allows for even more customisation to your delay effect. Now you can change anything in the Delay spectrum and signal.

Reverse
In each Delay mode, the input can be reversed. The feedback signal, however, is not reversed in order to keep its state. This reverse can be a great tool to use on specific instruments and audio samples, or on certain areas to bring a unique sound.

Stereo Filter
SphereDelay comes with a Stereo Filter. A 24db/ OCT, variable state, stereo linked, self-oscillating filter with Saturation, LFO and Envelope Follower modulation. With this, you can make tweaks in your delay effect signal to get the correct tone that suits your taste.