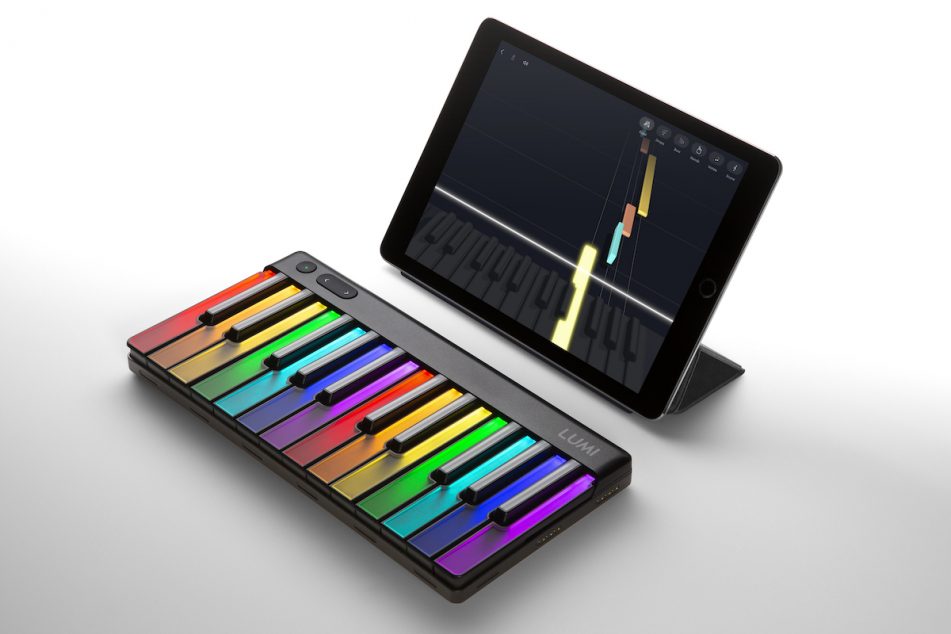 More people are listening to music than ever before because of music streaming. But only a tiny proportion play a musical instrument regularly. ROLI, the creator of the groundbreaking Seaboard and BLOCKS, today makes a bid to change that with LUMI, the world’s first truly smart way for everyone to learn and play music.

LUMI combines LUMI Keys, a fully illuminated keyboard, and the LUMI app that features a curated library of hundreds of hit songs — all in one colorful, interactive experience. Players choose a song in the app, follow the lights on LUMI Keys, and start playing immediately, learning music as they go.

The first fully modular portable keyboard, LUMI Keys can double or triple in size just by magnetically snapping multiple keyboards together. Powered by ROLI’s Brightkey technology, LUMI Keys features the brightest RGB illuminated keys ever made. It fits in a backpack and can travel anywhere, because it’s compact and weighs less than an iPad Pro.
The integration of the LUMI app with LUMI Keys creates a fun learning platform that is the very first of its kind. With keyboard and app working seamlessly, players can:

Roland Lamb, founder and CEO of ROLI, reinvented the keyboard once before with the award-winning Seaboard. He and the ROLI team have done it again with LUMI, this time to enable everyone to experience the joy of music making.

“​Many people would love to play an instrument but worry that they don’t have the talent. Through our research, design, and innovation at ROLI, we’ve come to believe that the problem is not a lack of talent. Rather, instruments themselves are not smart enough. What excites me most is that the intelligence of LUMI means that there’s something in it for everyone. On one hand my own kids now prefer LUMI time to movie time. On the other hand, several of the world’s leading keyboard players can’t wait to use LUMI in the studio and on the stage.”​

LUMI is now available for pre-order on Kickstarter from June 18 to July 17. It ships in October 2019. Visit the Kickstarter page​ to learn more and be one of the first people to own LUMI.