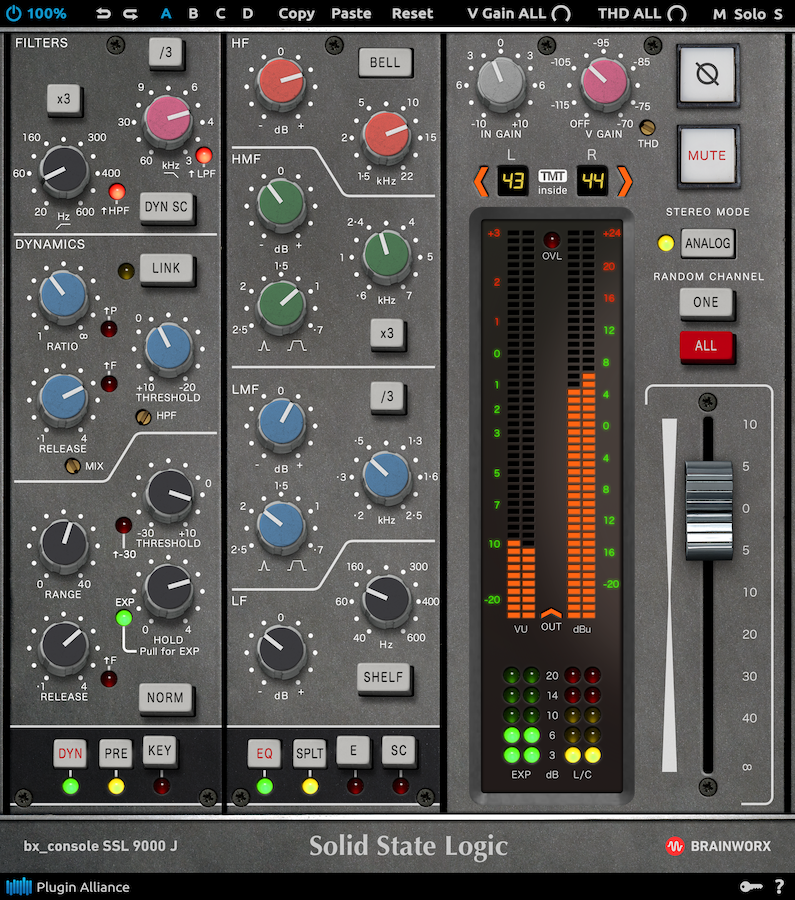 The SSL 9000 J improved upon its predecessors by offering extended bottom end, a more clean and open top end, and additional distortion-free headroom — quickly making it a favorite among the top producers and engineers who crafted some of the biggest pop, hip-hop, R&B, and orchestral recordings of the 1990s, 2000s, and beyond.

But better still, bx_console SSL 9000 J has been taken to the next level by Brainworx adding powerful plugin-only features, such as continuously variable THD (Total Harmonic Distortion) and V GAIN (virtual gain) controls to add colorful saturation and/or simulated analog noise independently or globally — changeable across all plugin instances. In addition to the original EQ, DYNAMICS, and FILTERS sections, it also features switchable EQ modes between E- and G-style filters.

Notable 9000 Series-only dynamics features such as ‘peak detect’ and expander/gate ‘hold’ are all present and correct, accessible via a scalable UI (User Interface) to adapt to various screen sizes and workflows. With 72 different TMT channel emulations in one plugin, bx_console SSL 9000 J users are working with the only true console emulation — everything else is just a channel strip.

Says Michael Brauer: “The bx_console SSL 9000 J was the missing link going hybrid and in the box.” Having spent so long working so successfully with Solid State Logic’s legendary large-format 9000 J Series console in his previous New York studio before bravely moving into a hybrid situation at his new cutting-edge mixing studio, BrauerSound, he should surely know!