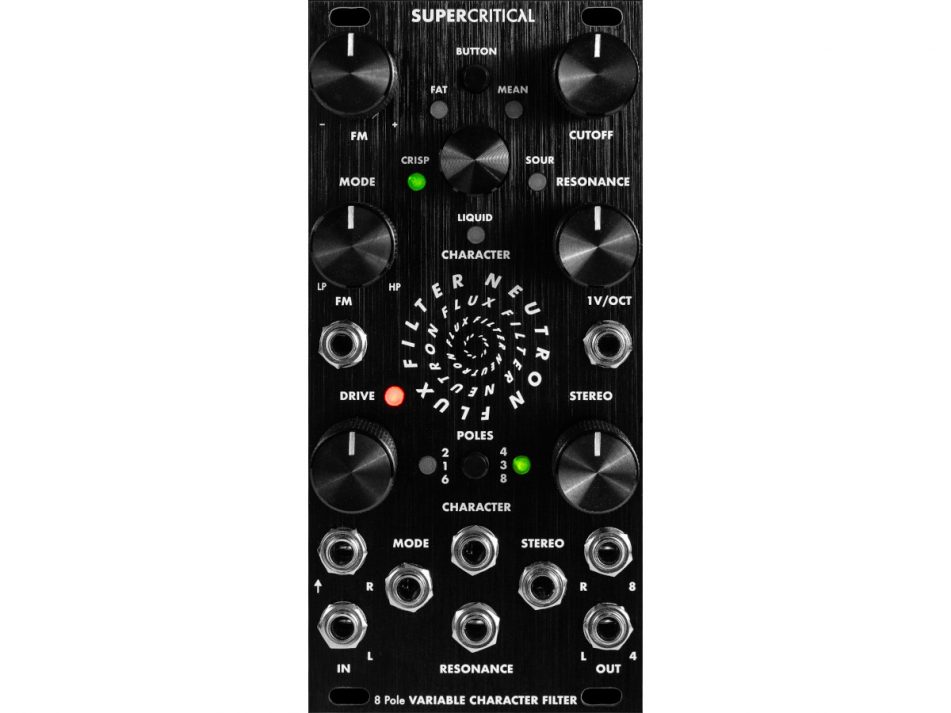 The new Supercritical “Neutron Flux” 8 Pole Variable Character Filter is a 12hp skiff friendly Eurorack filter module with a stereo analog core and digital control over it. The digital control allows the core to be shaped almost endlessly, taking on the character of almost any classic filter, and gives the filter the ability to explore sounds that have never been heard before.

The controls are familiar filter module controls (cutoff, bipolar FM, mode, drive) with some added spice and no complexity. The new features come in with these controls:

Overdrive: You can switch on the drive circuit for a +20dB boost and have the drive pot sweep from clean via warm saturation to extremely hard distortion.

Stereo: This control spreads the cutoff between L and R channels and induces drift. This way a mono signal can be split into wide stereo.

Two 4 pole filter cores: These can be run in stereo, mono to stereo or chained as a 8 pole mono filter for almost LPG-like steep slope. Both of them have their own drive circuits so you can have the overdrive stage in the front, in between or both.

The module can be used in many different ways. It can do classic LP/HP/BP filtering. It can self-oscillate with different waveforms. It can provide analog warmth and it can process audio from your DAW. It can act as a stereo distortion. It can spread your mono signal to a wide spatial stereo soundscape. It can do formants and other wild characters. It can do audio-rate deep FM (1V/oct and FM CV’s are all analog). It can behave nicely or get out of control.

It can do almost anything that an analog filter could ever do. Combined in a single unit.

The filter is priced at €495 and will ship in October.