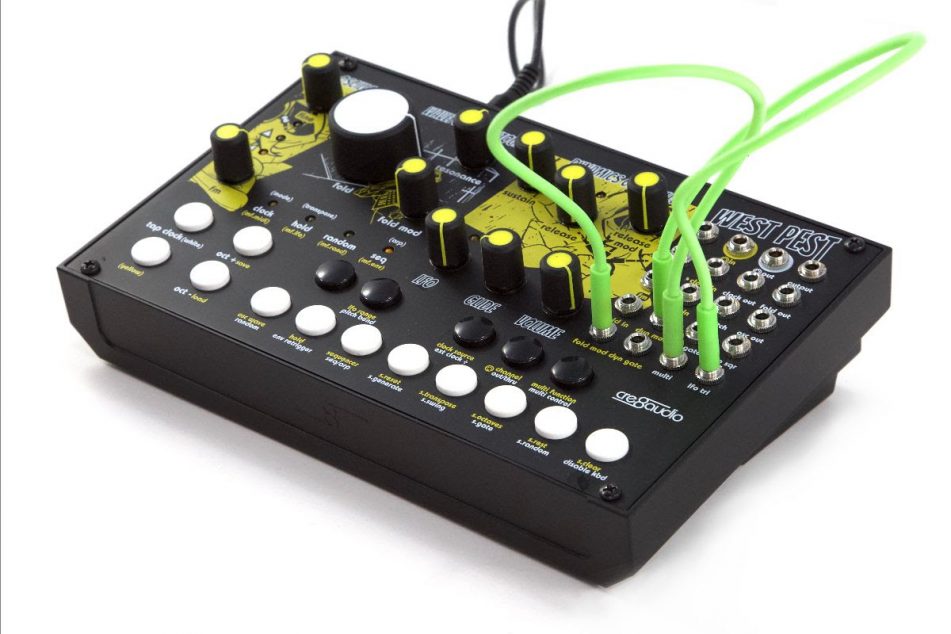 The Pittsburgh-designed core oscillator technology has matured through the development of their SV-1 and later with Voltage Research Laboratory. This iteration’s waveforms have been optimized to be run through West Pest’s wavefolder.

Wave folding/shaping is integral to West Pest’s foundation. Wavefolding amplifies incoming waveforms. Rather than clipping or distorting, the wavefolder circuit folds the waveforms back onto themselves, creating upwards of six folds to add vast harmonic complexity and depth.

West Pest’s snappy, responsive articulation is accomplished by the “Dynamics Controller,” Pittsburgh Modular’s original invention. This unique concept is designed to behave like a traditional filter, a VCA, and an envelope generator, all at once. Upon note trigger, the filter opens fully and rapidly, producing a sharp, percussive attack. At release, the Dynamics Controller adds a ringing, resonant decay, resulting in a rounder, more musical sound. The Dynamics Controller is the product of years of research by Pittsburgh’s founder Richard Nicol, and Chief of R&D Michael Johnsen. Inspired by the developments of West Coast synthesis pioneer Don Buchla, Pittsburgh Modular has modernized and evolved these concepts, taking them into new realms, adding wider range, consistency, stability, and resonance control, as well as an infinitely variable, ringing decay.

West Pest’s compositional and performance capabilities are as robust as its ferocious sonic engine. West Pest can be controlled via MIDI, control voltage (CV/Gate), and its function keys, which double as a keyboard controller. Also included is an integrated sequencer & arpeggiator that can also be controlled via MIDI and is externally clockable.

West Pest is imminently available with an estimated street price of $249.99 / €249.99 from Cre8audio.com and Cre8audio dealers worldwide.