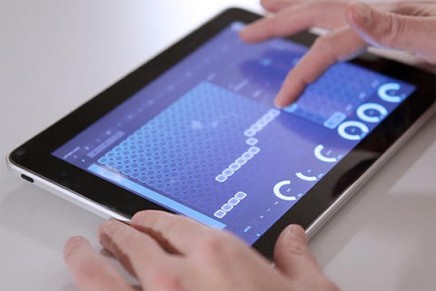 Lemur – the legendary multitouch MIDI/OSC controller returns. As we mentioned earlier, the Lemur controller has gotten a new “lease of life” with the release of an iOs version for the iPad. Lemur is now a professional iOS controller app that doesn’t cut any corners. It lets you control anything, any way you want. Total flexibility means it can go as deep as you need it to. Lemur can control DJ software, live electronic music performance software, studio production software (DAWs), VJ software, visual synthesis software, stage lighting and more. 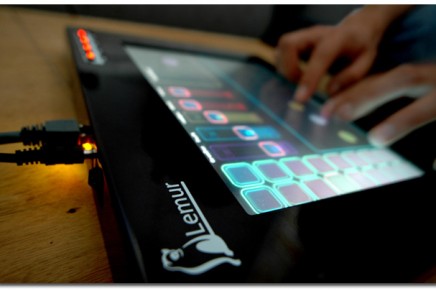 Since 2002, JazzMutant has been a acknowledged pioneer in the field of Creative Computing and Multi-touch technology, being the first-ever company to develop and bring to the market a product featuring a multi-touch screen as early as 2005. Since its market launch, the Lemur has been endorsed by a fascinating community of music and video artists. Nine Inch Nails, Richard Devine, Hot Chip, Ritchie Hawtin, Matthew Herbert, M.I.A, Mike Relm, Alva Noto, Ryuchi Sakamoto, Daft Punk, Bjork, … : The list of prestigious and influent artists who have made the Lemur their favorite pet companion on stage would be way too long to be mentioned here. Its visionary concept and groundbreaking technologies allowed the Lemur to win numerous international press awards and was recently elected “Innovation of the decade” by Future Music.

With the groundbreaking Lemur controller Jazzmutant have revolutionised the way in which performers can now interact with light, video and sound. The Lemur offers an unrivalled package of intuitive features beneath a futuristic multitouch-sensitive surface, and as result has won fans across the globe including the groundbreaking musicians Richie Hawtin, Björk and Ryuichi Sakamoto. The video below is a demonstration of the Lemur together with the new MU software and Ableton Live.

JazzMutant announce Mu for Lemur – controlling Ableton Live has never been easier, faster or more intuitive for the ultimate hands-on live performance and music production experience. JazzMutant’s Lemur has already established itself as the ultimate controller, pioneering multi-touch hands-on control and bridging the gap between man and machine in ways that have revolutionised music creation. Now with their new Mu plug-in JazzMutant is set to bring ultimate integration between the Lemur controller and Ableton Live.

Jazzmutant unveils the V2 software upgrade for their Lemur controller at this year’s NAMM show and are celebrating its arrival by announcing price drops for both of their revolutionary controllers.

Version 2 firmware for the revolutionary multitouch-screen controller is announced making it even more powerful, more intuitive and more flexible.

Jazzmutant manufactures the amazing Lemur, a top of the range control surface for audio and media applications. At the recent MusikMesse they introduced another amazing control interface, the Dexter.