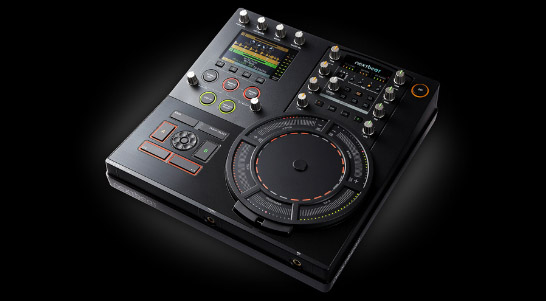 Its wireless portable control unit enables performers to move free from the main device, resulting in more dynamic and energetic live performances, contrasting to the traditional style of DJs performing inside booths.

Others features:
All in one machine
nextbeat MK2 combines two digital players, a two channel mixer, an effects processor and sampler in a single, lightweight and record-sized unit. Its 3.5-inch LCD panel displays information such as the track information, waveform, cue points and loop points providing all the functionality a DJ needs for playing music. In addition, nextbeat MK2 does not require a PC like many other DJ systems allowing DJs to quickly setup their gear and to reduce the necessary equipment.

Fully digital
All digital Audio files are downloaded to the system either directly from a computer using a USB connection or stored on CF cards. nextbeat MK2’s sampler function can be used to directly record digital sound sources, allowing sampled sounds to be incorporated into performances and modified. The effects processor features six types of effects, which can be assigned to channel A, B or Master.

Pricing and availability
nextbeat MK2 will be available in the network of nextbeat authorised dealers including pro-sound dealers and music stores. It is priced at 999€ (£869) including VAT and comes with a two-year warranty.