IK Multimedia is pleased to announce AmpliTube 2 for iPhone: a major update to the leading guitar software and now one of the most powerful music creation apps available for the iOS platform. 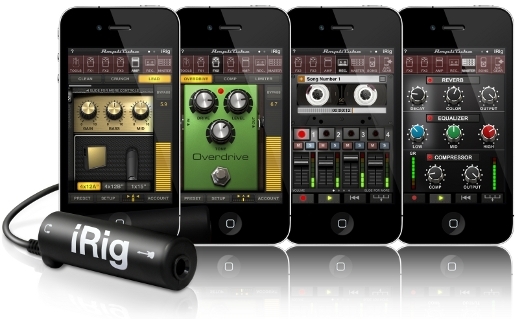 AmpliTube 2 for iPhone offers incredibly realistic tones and effects, full multi-track recording capabilities and an advanced practice tool – all in one convenient mobile app, from the leaders in analog gear modelling software for professional recording studios. Combined with the iRig interface adapter, AmpliTube 2 for iPhone allows users to play, practice and record anytime and anywhere with world-class sound for guitar and bass – but also for any other type of instrument.

What’s new in AmpliTube 2 for iPhone:

A full effects rig for guitar, bass and any other instrument

AmpliTube 2 for iPhone offers players an entire guitar/bass rig with 3 stompbox effects running into an amp-head with effects plus cabinet and a microphone. A total of up to 16 stompbox effects are now available (delay, fuzz, overdrive, wah, envelope filter, chorus, flanger, phaser, octave, distortion, noise filter, compressor, reverb, parametric EQ, graphic EQ, limiter), 5 amps with full controls (clean, crunch, lead, metal, bass), 5 speaker cabinets and 2 microphones (dynamic and condenser). The sound of the gear and cabinets has also been greatly improved utilizing DSP technology derived directly from AmpliTube 3 for Mac/PC, the leader in amp modelling software for professional studios. Additionally, up to 36 “full rig” tone presets can be saved, named and recalled on the fly. All these effects are essentials for guitar and bass tone shaping and they are also great on a wide range of other instruments such as acoustic guitars and basses, keyboards, synths, drums and vocals.

AmpliTube 2 for iPhone now includes a recorder with the ability to quickly capture ideas, then mix, re-amp and export them as WAV or MP3 files. The re-amping feature provides the ability to change the sound and tone of the original recording by applying a different set of effects after the track has been recorded without having to re-record it. The recorder in AmpliTube 2 can also be expanded to a full-fledged professional multi-track studio by adding the four-track recorder plus master effects section with reverb, equalizer and compressor (available as in-app purchase). With the 4-track recorder, users can record an entire band or produce full songs and compositions directly in AmpliTube on their mobile device. Track controls include individual volume, pan, apply FX, send FX, plus the ability to import audio directly into each track. The “Bounce” feature allows users to bounce all tracks to a single track, freeing up track space to record additional material for virtually unlimited recording ability.

A powerful practice and learning tool

Up to 50 songs and backing tracks can now be imported directly from the iPod library in the device or from the computer using iTunes file sharing or a Wi-Fi connection. AmpliTube 2 for iPhone now also sports IK’s popular SpeedTrainer learning/practice feature that allows users to slow down or speed up the tempo of imported songs (1/2 speed, or 2x speed) without affecting the pitch. A digital chromatic tuner and metronome are also included, making AmpliTube 2 the perfect practice/learning tool.

– Real-time mobile guitar and bass multi-FX + recording + practice app
– Full rig with 3 simultaneous stompboxes + amp with effects + cabinet + mic
– Choose from 16 Stomps, 5 Amps, 5 Cabinets, 2 Mics
– Single track recorder, with re-amping, expandable to a full 4 track recording studio with master effects section with 3 effects
– Import and play up to 50 songs as backing tracks directly from iPod library or computer
– Slow down or speed up the tempo (-50% to +200%) of imported songs without affecting their pitch
– 36 presets can be saved/named/recalled on the fly
– Includes a tuner and metronome
– Low-latency for real-time playing
– FREE and LE versions also available

AmpliTube 2 for iPad is currently in development with even more powerful features and will be announced shortly. Current iPad only users are advised to wait for the dedicated version before going ahead with the in-app purchase of the iPhone version.

AmpliTube 2 for iPhone is now available from the iTunes App Store in 3 versions:

Additional gear can be added through in-app purchase of a-la-carte models with stompboxes costing €2.39 each and amplifiers + cabinets for €3.99 each (available selection depends on the version). The new four-track recorder with master effects section can be added as an in-app purchase for €7.99 in each of the available versions.