Snapper is the on-screen waveform that appears as soon as you select a sound file in the Mac Finder. While staying in the Finder, you can grab a part of the waveform and drag it anywhere: into another Finder window to create a new file, into tracks of your editing software, or you can convert it to split-stereo, mp3, mp4 etc. You can extract audio from video, normalize, fade, or shoot the selection up to the cursor of your Pro Tools, Nuendo, Cubase or Logic. All without ever leaving the Mac Finder. 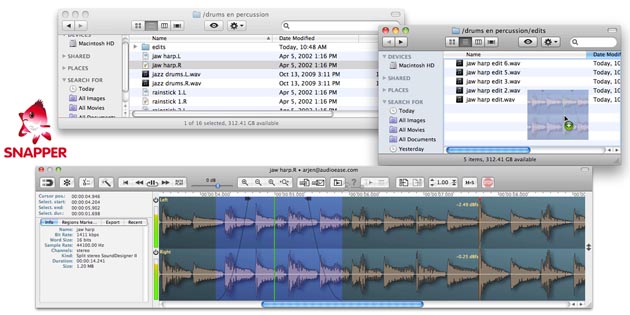 It feels, as one user put it, as if the soundfiles on your Mac are finally open and accessible. You can try that for yourself using Snapper’s 100 day fully functional demo at audioease.com/snapper

Snapper 2 is a major ugrade to Snapper 1, adding the top features people have been asking for:
– Much improved integration with Snow Leopard.
– Spot-to-cursor supports Nuendo, Cubase, Logic and ProTools
– Drag selections anywhere, into tracks of any DAW, video editor or even iChat or mail.
– Even smaller cpu footprint
– Better looking waveforms that build up quicker, and zoom smoother
– Loop playback
– 64 bit file support
– New edit features such as a trim tool, fades and normalizing
– Varispeed playback without pitch shift
– Recent files tab
– Level meters
– and dozens of other features.

Here is a 100 second overview tour of Snapper 2, and a movie about only the new features. Snapper 2 costs 59 EUR or 79 USD, and upgrades cost 39 EUR or 49 USD. Anyone that has purchased Snapper in the past 6 months gets a free upgrade.