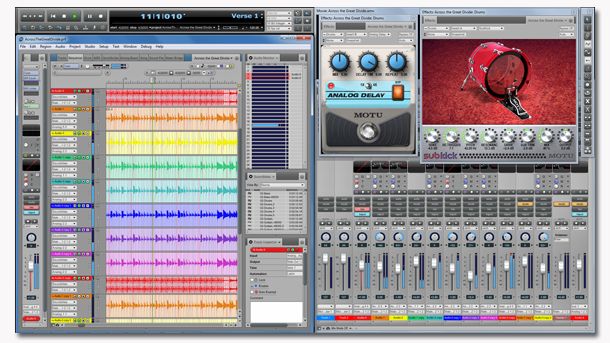 “With a long history of firsts, Digital Performer is widely considered to be a leader in audio software technology,” said Jim Cooper, MOTU Director of Marketing. “We are thrilled to bring Digital Performer’s leading role of exceptional performance and innovation to Windows-based recording artists, producers, engineers, remixers, composers and anyone looking for advanced desktop music and audio production.”

DP8 will operate in 32-bit or 64-bit mode on Mac OS X and Windows 7. On Windows, it will support VST plug-ins and Rewire. MOTU demonstrated DP8 running on HP Z Workstations and HP EliteBook Mobile Workstations provided by Hewlett-Packard.

Other new DP8 features
Punch Guard™ records an extra four seconds of audio before and after record passes, allowing users to edge-edit in/out points to “uncover” audio material accidentally cut off during recording. DP8’s new video engine allows full-screen viewing of full 720 or 1080 HD video clips on a primary or secondary computer monitor, or on a conventional HDMI or SDI video monitor connected to a MOTU video interface such as the HD Express or HDX-SDI.

Digital Performer’s Themes allow users to change the entire look of the software with one click. DP8 adds 14 new themes, including “Hi-Fi”, “Arctic”, and “None More Black”.