Allen & Heath’s iLive digital mixing system has been selected by FOH engineer, David Millward, as the console of choice on Morrissey’s 2012 worldwide tour. Requiring a small, lightweight console to travel with the production, Millward selected an iLive-80 Control Surface and iDR10 modular MixRack fitted with a Dante Card for multitrack recording and virtual soundchecking. 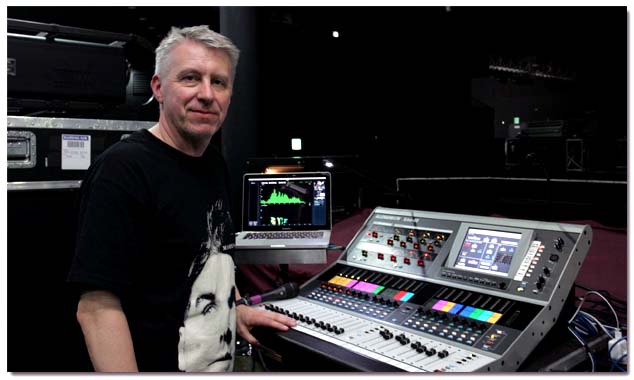 “I’ve been using iLive on tours with Tindersticks over the last couple of years, most recently renting a pair of R72 surfaces, and I’ve enjoyed the experience immensely. So, I had been wondering how it would perform on a Morrissey tour,” comments Millward.

The tour has already visited Japan, Korea, Singapore, Indonesia, The Philippines, Hawaii and USA during April and May.

“All the backline equipment was to be air freighted around Asia at considerable cost but it seemed the only realistic option would be for me to use locally provided PA systems. However, the iLive system is so compact and lightweight I was able to include it without adding a fortune to the air freight costs. To achieve what I wanted with its nearest rival, I would have needed more additional pieces of equipment, including outboard effects and a recording interface and the total weight would have been almost twice that of the iLive,” explains Millward.

“Another very important reason for me using iLive was the excellent remote control facilities available when using both the iLive Editor programme on my laptop and the MixPad app on my iPad. Being able to walk around the venue and individually mute or apply level, EQ and delay changes to each particular area of the PA really speeded up the system set up, and meant I rarely needed to rely on the local engineers.”

With production support provided by SSE Canegreen, the tour is about to embark on dates in Europe, including summer festivals, followed by an extensive tour of the USA.

“It’s an exceptionally compact surface, which is great fun to mix on. I love iLive’s quality of sound – words like ‘fat’, ‘warm’ and ‘open’ spring to mind – and the range of built-in effects have in my opinion the best reverbs I’ve heard on any console in any price range.  I also particularly love the ability to drag ‘n drop any type of channel strip, inputs, outputs, DCAs, FX returns anywhere on the entire surface and even on a per scene basis without affecting audio or worrying about re-patching inputs. Bringing just the channels needed specifically for each song right to your fingertips means you can really concentrate on mixing and being creative. I enjoy it so much it is currently the only console on my audio specification!” Millward concludes.