Native Instruments launched REVERB CLASSICS – two premium-quality algorithmic reverbs inspired by renowned studio hardware. While each effect has its own distinct sound, both provide a rich, harmonic character that adds dimension and depth to any source. A first-of-its-kind display provides visual feedback to monitor the effect’s output in real time – a powerful feature for quickly shaping the effect with ease and precision. The REVERB CLASSICS were created in cooperation with Softube, the acclaimed Swedish company renowned for their painstakingly accurate emulations of audio hardware. 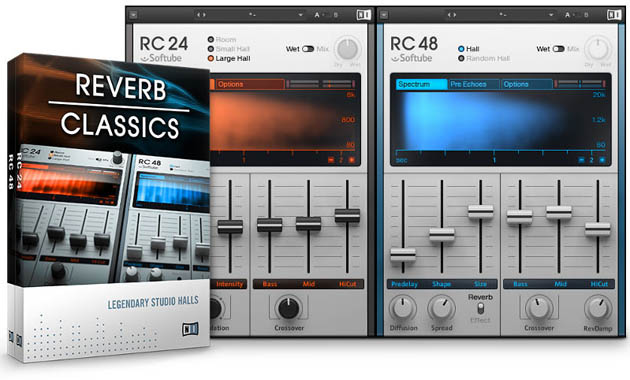 The REVERB CLASSICS faithfully recreate two renowned algorithmic reverb units that rose to prominence 1980s and 1990s. Each has been featured on countless studio recordings and is a standard effect in top studios around the world. The RC 24 provides a rich, dark, and instantly identifiable sound suitable for anything from subtle widening to dramatic sound design. The RC 48, while sharing some similarities, sounds richer, lush, and somewhat brighter by comparison.

The most striking feature of the REVERB CLASSICS is the prominent graphical display, which takes up roughly half of the interface. This display effectively visualizes the shape and depth of the reverb, as well as the decay of the reverb tail. The display immediately reacts to parameter adjustments, allowing users to visually monitor the effect in real time, and providing a new approach to reverb design.

The RC 24 is inspired by one of the first digital studio reverbs to gain wide popularity in recording studios around the world. Featuring Large Hall, Small Hall, and Room reverb algorithms, the distinctive sound of 12-bit A/D converters provides a unique quality that cuts through dense mixes with a unique presence. The RC 24 is equally useful on acoustic and electronic sounds for adding rich dimension, texture, and space while still preserving the original harmonics of a sound. Pushed to extreme settings, it can be used as a creative sound design tool, transforming relatively simple sounds into metallic percussive textures, dense, drone-like pads, or anything in between.

The RC 48 delivers two hall algorithms inspired by a classic studio reverb heard on numerous gold and platinum recordings, as well as game, TV, and film soundtracks. The RC 48 delivers lush, musical reverb renowned for the depth it gives to vocals and acoustic instruments. A wide variety of versatile textures can be achieved through adjusting the Diffusion and Spread controls, while an additional Effect option on the Size fader allows users to create interesting new modulation effects. The Random Hall algorithm also features Spin and Wander controls, providing random movement with lively, natural tails.

All three effects run as VST, AU, or AAX plug-ins inside all popular host sequencers. A free demo of each effect is available from the Native Instruments website.

Additional information on the REVERB CLASSICS is available at: www.native-instruments.com/reverbclassics