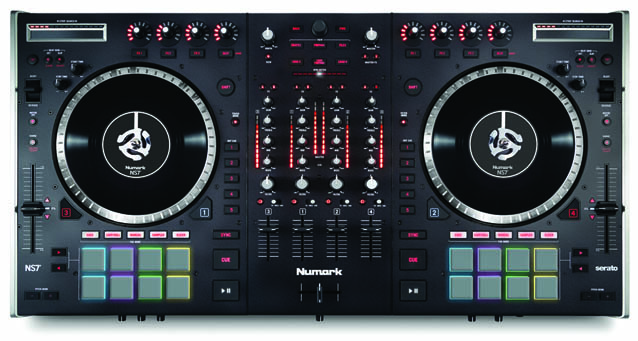 For more than 20 years, Numark has set the pace in the world of digital DJing, empowering DJs with cutting-edge technology that has continually advanced the art form. In 2007, Numark and Serato® released NS7, a controller that blends different eras of DJing so completely it makes them virtually indistinguishable from each other. Since then, the powerful experience offered by NS7 has defined the top tier of DJ performance, setting the standard by which all other controllers are judged.

In addition, each pad features RGB illumination, allowing for a virtually endless amount of color variations assignable via MIDI. Vinyl platter control has never felt more familiar with its high- and low-torque motorized platters with real slip mats and real vinyl sitting on 3,600 ticks of resolution. NS7 II’s four-channel mixer works with or without a computer and includes a full array of external device inputs. Capacitive touch-activated filter, gain, EQ, and effects knobs are other features incorporated from Akai Professional, which turn the knobs themselves into control surfaces. DJs can use them for instant-on parameter control, blending effects, and instant frequency kills.

“NS7 II is an interactive playground,” said Chris Roman, Numark Product Manager. “It’s built to squeeze every ounce of capability out of Serato DJ and push your creative limits. It’s born to perform and to empower DJs with maximum live-performance creative capability.”