Ross Birchard is Hudson Mohawke – an artist who constantly pushes the expectations and boundaries of scenes and genres. One of the most influential and forward thinking producers currently. His appetite for sounds started at a young age. A UK DMC finalist at 15, DJing was the focus. It’s through his production that he has grown into the artist he is today and that has taken the kid from Glasgow, to the world. 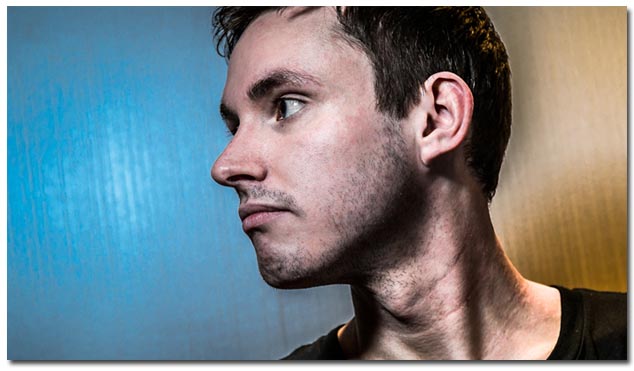 Moving on from Glasgow, it’s in London where Ross lives and works these days.

“I live in London at the moment. I have a bit of a love hate relationship with it. I do like being there and whenever I go back to Glasgow, I’ll spend a couple of days there and think, I need to get out of here, I need to get back to London… I’ve got a great studio there and I like working there. It’s good in terms of doing collaborations with people. A lot of people come through the city all the time.”

Ross’s first exposure to production was an early Playstation game where he developed his taste for making music. Fruity Loops followed and he’s been keeping it relatively similar ever since. It’s about mastering the simple things for Ross and is what allows him to be so creative with the tools he has.

“I used to do the DMC battles. Before that I had turntables but I was just beat mixing basically. I started doing competitions when I was about 14 – 15, something like that. It wasn’t until after that I wanted to get more into the musical side of things. That was when the music game came out on the Playstation. The Playstation games were similar to really old Atari computers that a lot of electronic producers used to use in the early 90’s. It’s fairly simple but the most basic tools to do the job, and that’s where I learned everything from. My parents got a PC for the house, then I was able to have Fruity Loops. I’m still using the exact same software today basically.”

“You work that much harder to master the craft of it, you know what I mean? I’m so happy that I pursued that skill set. That has lead into all of the production stuff that I do now. I started off being really really sample focused, and these days I’ve sort of switched a bit more towards more electronic stuff. I try not to have too much of a strict process with the whole thing. I try and not start things in the same method. I’ve always worked in a lot of different BPM ranges and a lot of different, I guess, genres in general. You know, I’m reluctant to have any sort of little micro scene names tagged onto things.“

Hudson Mohawke is an artist who traverses both the underground and mainstream. It’s a conscious decision to operate between the two and something that he’s always been interested in.

“Off the back of Myspace and a couple of other things, a few different labels have approached me. Luckily they came to me which was a blessing because I was never the kind of person that was going to be going, “Here’s my demo! Listen to this! Listen to this!” One of them being Warp and obviously I was a huge fan of them. I started off doing just an EP to see how it went and then moved on to doing an album after that. I’m about to do a second album, out this year.”

“Something that I have really wanted to be involved in for years is getting into the more pop side of it as well as just releasing underground records. I would love to work with someone like Prince. I would really love to do something like a Quincy Jones sort of collaborative project. I always wanted to work with Kanye and you know, thankfully that’s managed to happened, but we spent a month and a half, two months all sort of working together last year. One of his associates approached me to submit some stuff with him and did that, then went on to do a load of sessions with them. That’s sort of an ongoing thing.“

A humble artist at heart, Ross has never been one to bathe in the limelight. It’s always been about the music and letting it stand on its own. Growing the experience of his live show to match the power of his music is where things are heading. There’s no limit to his opportunities for the future.

“I’d really like to get into scoring things, I’d really like to do like an orchestral project or something like that, do some film work. I want to build my own live show up a lot more as well, and for like the next record I want to revamp everything and just make that into more of an experience. You know, I’m able to pursue what I always dreamed of doing when I was younger so I’m thankful for that.“

You can get a free Hudson Mohawke track now at Soundcloud.