Allen & Heath will launch the Xone:23, a 2-channel DJ mixer at NAMM 2014. The new mixer is packed with pro features that would normally be found in the booth of a top-rated club, including an enhanced version of the legendary Xone filter with resonance control, VCA faders, 3 band total kill EQ, illuminated switches, crossfader curve selector, with styling inspired by the flagship Xone:DB4. 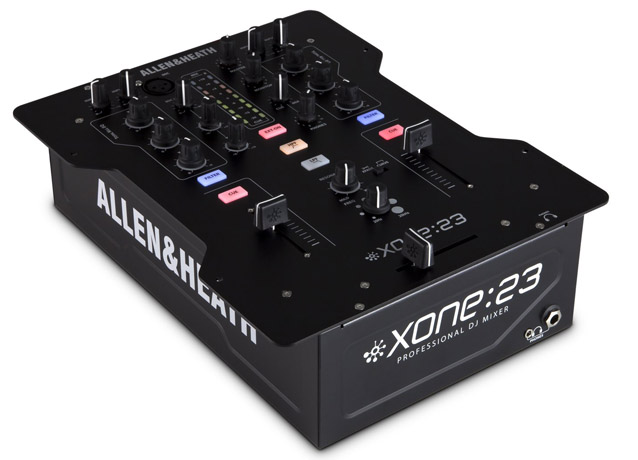 At the heart of the mixer is the renowned analogue Voltage Control Filter (VCF) system offering Low-Pass and High-Pass filters, frequency sweep and ‘mild to wild’ resonance control. There is also an FX loop to connect to third party FX units, which route back in through the filter system.

The 2 stereo channels feature independent level controls for each input enabling up to four stereo sources to be simultaneously routed to the mix, as well as the dedicated send and return system for external FX. The mixer can also be upgraded with the latest Innofader for enhanced scratch performance, available as an accessory from Allen & Heath.

The main mix output and mic input are on professional standard balanced XLR’s, and there is a dedicated record output. The Xone:23 is equipped with comprehensive monitoring facilities, including a booth output with its own volume control, a cue mix control, and signal levels clearly displayed on the 9 segment peak hold meters.

“We put a lot of effort into engineering the new Xone:23 to ensure we could offer our customers a high performance, feature packed stylish mixer, yet still retain the competitive price of its predecessor, the Xone:22,” says Xone design manager Andy Rigby-Jones. “Xone:23 takes its place in the Xone family without sacrificing either performance or features.”