While outfitting the first dedicated film music mix room in the world with Dolby Atmos capability, multi-award-winning film scoring mixer Dennis Sands needed an elegant solution to connect the multi-channel surround processor to his monitor system. When Sands and his design consultants, Ron Lagerlof of Visioneering Design and Andy Potvin from Dolby Laboratories, Inc., learned that Focusrite would shortly begin shipping the RedNet 6 MADI Bridge, they knew they had found that solution, and—sight unseen—ordered and installed one of the first units to be produced. 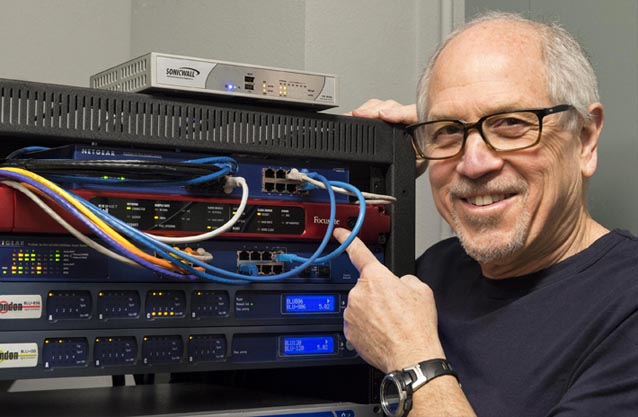 Sands generally records the film music projects on which he works at the major L.A. scoring stages, and in the past has brought many of those projects back to his Sound Waves SB studio in Santa Barbara, CA, about 95 miles up the coast from Los Angeles, to mix them. Then, at the end of 2012, he heard a demonstration of the Dolby Atmos multi-channel surround sound system and decided that he had to start mixing film music in the new immersive format. “I’d never heard anything like that. The clarity, transparency, the richness, the dimension, the spatial context of it all was really incredible,” he recalls. “I knew right away that this will be the way people will hear movies. Period.”

But with the installed base of Dolby Atmos systems thus far limited to re-recording stages, “I had no way of actually working in this format,” he says. Sands decided to upgrade his room with a Dolby Atmos processing system, at the same time making a significant investment in a new multi-channel speaker setup to support the format. But there was still one challenge to overcome: the outputs of the Dolby Atmos Rendering and Monitoring Unit, the system’s processing core, are on MADI optical and coaxial connectors, but the inputs to the BSS London that Sands uses to manage his monitoring set-up and switch between multi-channel formats accepts a Dante input.

When Sands and his team heard about RedNet 6, which provides a bi-directional link between any 64-channel MADI and a Dante-based audio network, they realised they had their solution: “Of all the options, the RedNet 6 was the pre-eminent choice, because it did the job elegantly, simply and at a very, very reasonable price. It was a fraction of the cost of the other options, which would have been a combination of units—and every time you start combining units there’s obviously a possibility for failure or difficulty or confusion.”

But as Sands also notes, “When we were first discussing interfacing all this technology into my studio the RedNet 6 wasn’t available yet,” so the unit they purchased would be the first unit they would even see. As it turned out, the team’s faith in the Focusrite brand and the reputation the company has earned as a manufacturer of world-class analogue and digital audio equipment over the past three decades proved to be completely justified. “I have unit number one,” he reports. “Ron picked it up from GC Pro, brought it in, connected it, and it worked beautifully. It’s the perfect device for the application. It’s just this great-looking single rack space box that sits in my rack and just cruises along. It’s an absolutely integral part of the signal chain.”

Thanks to the Dante audio network’s plug-and-play capability, the RedNet 6 was very easy to install. “There were no issues at all,” says Sands. “There was no configuration, there was no learning timeframe; it just plugged in and worked. It did everything we hoped it would do.”

The Cat 6 cabling also made installation a breeze. “It’s a single line. It’s all just elegant, simple and easy to deal with. And Cat 6 is relatively cheap: it’s one of the great things about the electronics world, really. Quality is increasing, the price is decreasing—and this fits right into that,” says Sands.

“Without the RedNet 6, I wouldn’t be on the air with Atmos,” he says. “Or, at least, it would have been a lot more complex and a lot more expensive.”

Sands has worked on nearly 300 feature films as a music scoring mixer, plus over two dozen more as a re-recording mixer, earning four OSCAR nominations — for The Polar Express, Cast Away, Contact and Forrest Gump — and winning two CAS Awards, including one for Lifetime Achievement, plus a Golden Reel in the process. But as Sands comments, “I consider myself an audio artist, specializing in music.” Over the years, mixing music releases and for television, he has also collected GRAMMY and Primetime EMMY Awards.