This week Softube does not only announce an official release date for the much anticipated next generation mixer Console 1, which will be in stores February 12. But it is also our great pleasure to announce that Console 1 will include Softube’s new model of one of the world’s most classic mixing consoles, Solid State Logic SL4000E. 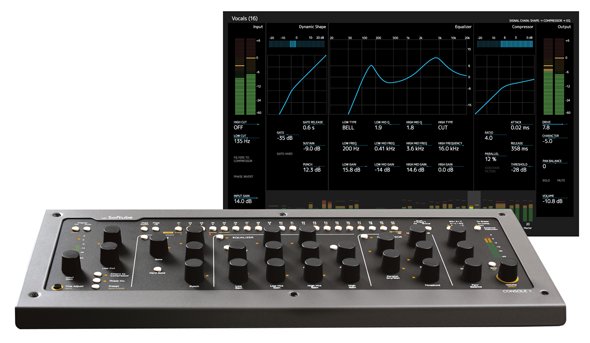 Softube’s Console 1 was first announced at Frankfurt Musikmesse in April 2013, where the unique new approach to music mixing on a computer immediately aroused a lot of interest, and was on many “best in show” lists in pro audio media outlets. The system has since been perfected, and now it is time for all those who have been waiting to finally get their unit.

Furthermore, Softube are honored to announce that Solid State Logic will officially endorse our model of their classic console SL4000E. The model is included in the purchasing price of Console 1, and consists of the coveted black knob E242 equalizer, the classic channel compressor, the musical expander/gate and the sweet high and low cut filters from that channel. We have also included a model of the harmonics, distortion and non-linearities obtained from overdriving the SL4000E console, which can be used to add analog distortion across the entire mix for that coherent “glue” sound. Adding to that is Softube’s own Transient Shaper, which is not a part of the SL4000E console or any other analog unit for that matter.

James Motley from Solid State Logic, head of business, workstation partner products, says: “We were very interested when the team from Softube approached us about Console 1. Our customers understand the benefit to their workflow that a console can bring and we were intrigued to see how this could be integrated with a DAW. We’ve long been fans of their plug-ins and when the opportunity arose to work together we were confident that we could do something special together.”