It wasn’t really a secret, as we all knew that it was coming, but Rob Papen has now officially announced the soon arrival of the version 2 of his software synth Blue. This highly anticipated synth will be shipping on the 10th of March. 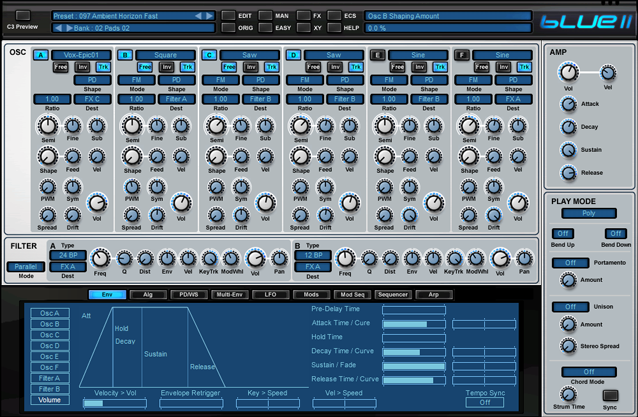 First released in 2005 BLUE already reflected Rob Papen’s cutting-edge, creative, and — most importantly — musical approach towards developing virtual instruments by first delivering FM and subtractive synthesis, then duly adding Phase Distortion and wave shaping synthesis into the highly creative mix to create one seriously creative combination. Rob Papen himself called it ‘Cross-fusion synthesis’ since it covered so much musical ground so effectively.

Today BLUE-II remains true to that ethos with even more sound dimensions and features to its extended name, starting with six oscillators beating at its musically creative heart. These can be connected in various ways, together with two analogue-style modelled stereo filters with 27 different filter types, an enormous range of processing and modulation options, sequencer, and an incredibly powerful arpeggiator. A new range of specially selected waveforms based on samples have been meticulously fashioned for creating new and fresh-sounding synth sounds, so don’t go expecting acoustic pianos galore here. However, since choirs and strings are an excellent basis for so many synth sounds BLUE-II has them in abundance — with much more besides!

But BLUE-II is also easy to use, thanks to its user-friendly user interface and an innovative Easy Edit page for speedy sound changes, while the Bank Manager allows whistle-stop navigation through thousands of inspirational Rob Papen presets and artist sound banks covering a wide range of musical styles.

BLUE-II represents an amazing journey into ‘Cross-fusion synthesis’ and, quite simply, sounds stunning!