Danny Bedrosian has keyboards in the blood. Born into a family of piano teachers, he began lessons at three and a half years old and was classically trained from that point, until age 19. Along with playing lots of choir and gospel music in his pre-teens, he caught the jazz bug at age nine. “I always thought my talent could be applied to any music,” he states. “It’s about communicating and applying your energy to whatever music you’re playing.” 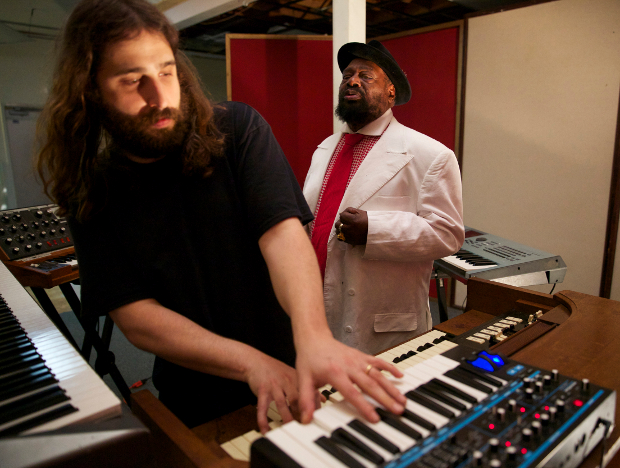 As a teenager, Danny was into many different styles of music, “but it wasn’t until I got into hip hop that I first became aware of George Clinton and Parliament-Funkadelic, because everyone was sampling their records,” he says. By age twelve, Danny’s goal in life was to be the keyboards player for the band, and by then he’d also become well-versed in the astonishing history of P-Funk.

When he was 16, he had his first encounter with the band: “At his shows in that era, George’s stage costume was basically a bedsheet with a hole cut in the middle for his head. In each city the band visited on the tour, there was a competition to design George’s bedsheet outfit, and I made one with loads of the band members painted on it. I won the competition and got the chance to meet the band backstage!” Danny had also brought along a recording of his own compositions, which he gave to George Clinton himself.

The band was impressed, and as soon as Danny was through the last stages of his formal education, he was invited to become part of the funk, learning the ropes as a technician at first, before moving to George Clinton’s current hometown of Tallahassee, Florida, and obtaining full-time bandmember status. “My first teching gigs were in 2000 and 2001. By May 2004, I was full-time keyboard player for Parliament-Funkadelic. It happened really quickly.” More than a decade later, Danny is still a main member of the band, and has the P-Funk sound honed to perfection.

Keyboards are an essential part of the trademark P-Funk sound and, over the years, many great synths and keyboards have been attached to that sound. From the Hammond B3 organ, Fender Rhodes and Hohner Clavinet D6, to Moog, Oberheim and Arp synthesizers, classic sounds from classic keyboards can be easily identified in the P-Funk back catalogue. “We’ve always attached ourselves to certain sounds, and I can say for a fact that, right now, the Novation Bass Station II is the synthesizer that we’re attaching to on stage and in the studio. It has these bright, powerful sounds — both bass and leads. In fact, the Bass Station II has replaced five of my synths!”

Aside from his work with George Clinton and Parliament-Funkadelic, Danny also records his own work and plays with a number of other bands. You can discover more here: www.dannybedrosian.com