KORG INC and Noritake Co., Limited are proud to announce the successful development of the ground breaking technology, Nutube, a new miniaturized and high performance tube. In cooperation with Noritake Itron Corporation, KORG INC. has developed the Nutube to offer incredible reliability and efficiency while still generating the same rich harmonics which vacuum tubes are known for. 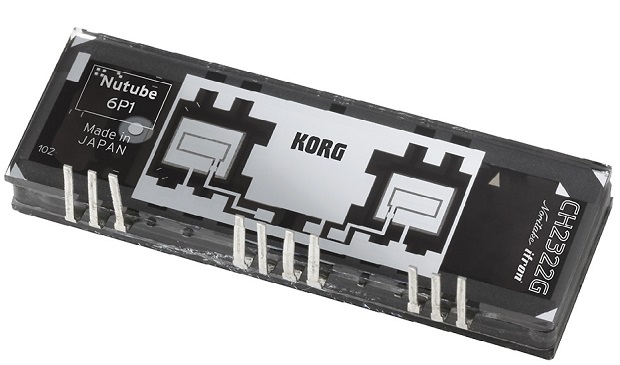 KORG has used vacuum tubes for many years in products such as VOX-branded guitar amps and effect units, KORG-branded dance/DJ products such as the electribe MX/SX and keyboards such as the SV-1. Vacuum tubes have played a major role in shaping the sound of VOX and KORG products, and have been a crucial element in their distinctive character.

As with previous vacuum tubes, this newly-developed Nutube is structured with an anode, grid, and filament, and operates as a complete triode tube, generating the same rich harmonics that are distinctive of conventional vacuum tubes. By applying technology from Noritake Co., Limited’s vacuum fluorescent displays, the structure of the vacuum tube has been modified, dramatically reducing its size and allowing it to consume less power. Production is carried out at the cutting-edge Japanese production facility of Noritake Itron, a subsidiary of Noritake Co., Limited., significantly raising the product quality in comparison to previous vacuum tubes by boasting the following features:

Miniaturization dramatically reduces power consumption, allowing the Nutube to operate using less than 2% of power required by conventional vacuum tubes and making it easy to power the unit on batteries.

The Nutube occupies less than 30% of the volume of a conventional vacuum tube. Its small size and low thermal output allows it to be easily mounted directly on a high-density circuit board without using a socket

The unique design and state of the art Japanese production facility ensures the Nutubes are built to the highest standard and offer up to 30,000 hours of continuous operating life. The high reliability means that it can be attached directly to the circuit board with confidence knowing that it will not need to be replaced regularly like a 12AX7.

“As an electronic component, a vacuum tube has the disadvantages of being larger than a transistor, having a shorter lifespan, and a higher power consumption, and although many people like the sound of a vacuum tube, historically they have been more difficult to deal with,” stated Fumio Mieda, KORG INC’s longstanding developer who was involved in numerous KORG synthesizers including the MS-20 which appeared in 1978. “The Nutube sets us free from these many limitations, making it possible for us to think about using it in new products,” added Mieda.

Most manufacturers stopped producing vacuum tubes in the 1970s and there haven’t been any notable advances in the field during the past fifty years. However, thanks to the Nutube 6P1, it is now easier to obtain a vacuum tube sound when amplifying musical instruments and other audio signals.

​The Nutube 6P1, currently being developed, takes advantage of KORG’s experience in musical instrument production, and is tuned for optimal effect to generate rich harmonics when used with a musical instrument. Products using the Nutube are currently under development, with announcements expected during 2015. (Patent applied for.)”