The new FS “Scratch” record is designed specifically for Hip-Hop and Scratch DJ’s. The record is designed to allow visual cueing of songs and needle dropping while using FinalScratch®. One side of the record features 15 minutes of continuous time code with a crossover spacer in the cut of the groove every minute.

A crossover spacer groove is usually inserted in-between songs on a standard LP. Stanton uses the same technology on the new FS record but still presses the time code on these spacers, allowing for no break in audio playback while the needle passes through the spacer. By using the crossover grooves the DJ can visually cue minute by minute into each track with out having to check the final scratch screen to see the time code position.

The second side of the scratch record features two standard 5 minute tracks (without crossover spacers) of time code and one 5 minute track with crossover groove spacers every 30 seconds for quick needle dropping during scratching and battling. Both sides of this record are pressed at 33 1/3 RPM. ( Weight: 125 grams )

The new FinalScratch records will be available at authorized Stanton dealers soon. 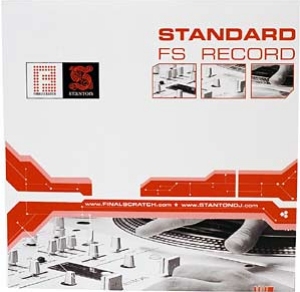