LinPlug is proud to announce version
4.1 of its award winning RM IV drum
synth and sample module. This new
release includes over 2700 MIDI
beats, specially designed for use with
the RM IV.

Chicago-based Groove Monkee, a developer of professional MIDI products, has
licensed parts of his MIDI beats collection to LinPlug. This collection of 2200
beats covers 24 different styles of music including Rock, Blues, Funk, Hip Hop,
and R&B. As well as this, UK-based Groove Criminals have added a further 450
House, Techno, Urban and Breakbeat beats. Finally, Kohlekeller Studio from
Germany handcrafted a collection of Rock beats specially designed for the
Kohlekeller Kits which are included with the RM IV.

To make using these MIDI beats easier, the RM IV has been enhanced and now
includes a MIDI browser which enables simple and fast previewing of the
included beats. The beats are played back by the RM IV in sync with the host
software and can easily be moved to the host’s MIDI tracks via “drag and drop”.

Finally, 100 new sample-based Kits will be included with the RM IV. These new
Kits have been created primarily for contemporary music styles. This means that
the RM IV now comes with more than 270 complete drum kits (including more
than 4200 different sounds) and over 2700 MIDI beats.

Purchase: The RM IV is available worldwide in all major music stores as either
a boxed product (including a printed manual), or as a CD product from the
LinPlug online shop at www.linplug.com from 15 September 2004. Customers
who bough RM IV on 1st of August 2004 or later will get a free downloadable
update. 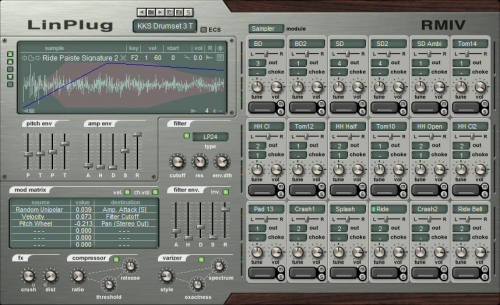