Today Ableton released an update for their Live software. The latest version is now v.4.0.3. 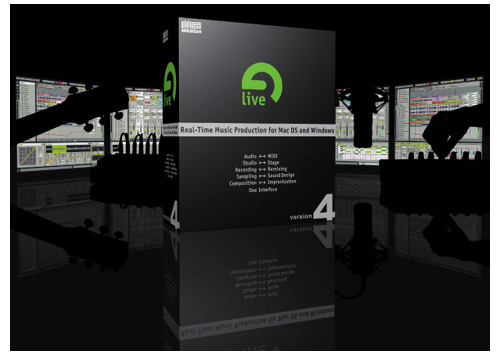 – Previewing While Renaming Files in Browser – When a file was renamed in Live’s browser the preview switch was switched off.

– ReWire Master – When Live was the ReWire Master, switching to arranger or hiding I/O View caused an incorrect ReWire Slave to be activated.

– ReWire Master to Reason: Loop – When Live was running as ReWire Master for Reason, and the loop was enabled, sometimes Reason would stand still for one loop cycle.

– ReWire Master: Program Changes – When Live was running as ReWire Master, program change messages sent to the ReWire Slave were not correct.

– ReWire Slave: Sample Rate – When running Live as ReWire Slave, only a sample rate of 44100 kHz worked correctly with some hosts.

– Load Documents with Reaktor as AU – Live would crash when loading a document containing Reaktor (as AU).

– Rendering MIDI with Plug-in Instruments – Often, the first bar was not completely rendered when a MIDI track containing a plug-in instrument was rendered.

– Recording Files Larger Than 2GB – Live would crash when trying to record files larger than 2 GB. Now, when a recording file approaches the 2GB limit, its track is automatically and silently disarmed.

– Session Overdub Recording with Global Record – When a session clip’s loop settings were changed, it would update according to the clip update rate. Now it takes effect immediately.

– Plug-in Instruments: Side Chain – First side chain input bus of instruments with multiple outs did not work.

– Sending of NRPNs – NRPNs were not correctly sent through Live and to plug-ins. With this bug fix the Korg Legacy Collection plug-ins will work in Live.

– Missing Notes with Remote25 (USB) – There were missed notes when using the Novation Remote25 connected via USB.

– Key and MIDI Mapping on Moved Effects/Instruments – When an effect or instrument was moved from one track into another track, all Key and MIDI mappings were lost.

– Key in Dialogs – Sometimes the key did not work in dialogs.

– Copy-Modifier Key – When using the Copy-modifier key it was necessary to hold it down before the mouse down. Now it can be done also after the mouse down.

– Japanese Characters in File Name – It was not possible to open or save a Live set if the name or the path of the set contained Japanese characters.

– Athlon 64 Compatibility – There were no sound and graphical updates on Athlon 64 machines running on Windows XP with Service Pack 2 with the new “Execution Protection” feature enabled.

– Automation Chooser for Tracks with MIDI Output – For tracks with a MIDI output, Mixer did not appear in the track automation chooser. Now it shows at least the “Speaker On” entry.

– Dragging Looped Arranger Clips – When dragging the left edge of a looped arranger clip to the left, the offset marker was not folded correctly.

– Play Selection – There were clicks in the audio when play selection (Shift + Space) was used.

– Loop with Snap to Grid – When changing the clip loop settings, the loop would snap to the grid even if the grid was off.


You do not need to uninstall a previous Live version to install Live 4.0.3. You can install the new version in parallel.