Logic Express 7, a streamlined version of Logic, provides a basic set of professional tools for students, educators and advanced hobbyists at an affordable price of $299. Logic Express 7 and Logic Pro 7 both come with support for projects from GarageBand, Apple’s consumer music creation software, offering users a smooth migration path to high-end audio production.

New software instruments in Logic Pro 7 include Sculpture and UltraBeat providing customers with more options to create unique sounds and generate drum and bass sequences. Sculpture simulates the behavioral characteristics of a vibrating string or bar and provides users with the ability to control and create their own dynamic and expressive sounds. UltraBeat is an innovative and powerful drum machine utilizing several types of synthesis including FM, subtractive, sample-based and component modeling. UltraBeat consists of up to 25 independently modifiable drum voices and includes a uniquely designed integrated step sequencer.

Logic Pro 7 introduces distributed audio processing, a revolutionary technology that allows audio pros to tap into a virtually unlimited number of Macs to expand available DSP power. The result is an audio and music production system with processing power previously unimaginable for native based systems. This breakthrough feature allows musicians and audio engineers to be even more creative by using a virtually unlimited number of plug-ins to create and process sounds.


Logic Pro 7 includes support for Apple Loops, the powerful open-standard file format that allows users to quickly find a loop by instrument, genre or mood. Apple Loops in Logic Pro 7 provide complete real-time flexibility for changing and adjusting the sound and notes in a loop. Workflow in Logic Pro 7 is significantly improved with over 100 productivity enhancement features including song templates, channel strip save and recall, professional shuffle and auto crossfade edit modes, directly accessible from the arrange window. Additionally, users can compile and burn CDs to the Red Book standard with WaveBurner, a stand alone mastering and CD burning application included with Logic Pro 7.


Apple offers a complete line of integrated music creation tools that addresses the needs of consumers, students, educators, creative pros and professional musicians alike. For consumers, GarageBand turns the Mac® into a high-quality musical instrument and complete recording studio. GarageBand Jam Packs, including the new Remix Tools and Rhythm Section packs, provide additional pro quality loops and instruments for GarageBand, Logic Express 7 and Logic Pro 7 for $99. Projects created with GarageBand can be easily imported into Logic Express 7 and Logic Pro 7, providing an easy upgrade path for music hobbyists who are ready to graduate to a more advanced audio production tool. Additionally, everything learned in Logic Express 7 is directly transferable to Logic Pro 7. 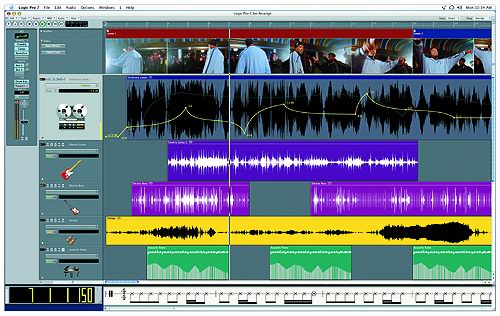 Logic Pro 7 is available now through the Apple Store (www.apple.com), Apple’s retail stores and Apple Authorized Resellers for a suggested retail price of $999 (US). Registered users of Logic Pro 6 as well as Logic Platinum, Logic Gold 5 or Logic Gold 6 can upgrade to Logic Pro 7 for $299 (US). Logic Express 7 will be available in October for a suggested retail price of $299 (US). Full system requirements can be found at www.apple.com/logic