For the first time, a native music production system combines full-featured audio and MIDI recording and editing, virtual instruments and powerful audio mixing with the added flexibility of loop- and pattern-based arranging and mixing. Cubase SX3 supports Windows XP and Mac OSX and works with a multitude of audio interfaces. 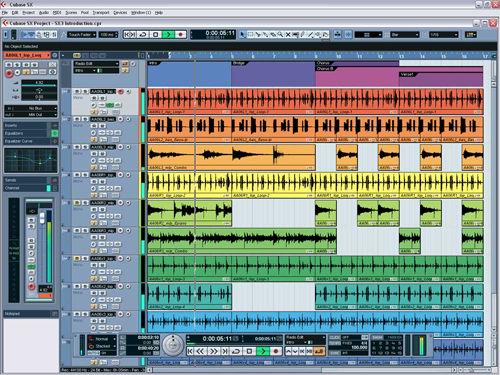 # Intuitive Play Order Track for pattern-based arranging adds a new level of creative music editing. Divide your song into sections, and then re-arrange it on the fly. Compare alternative versions of your song and then convert them back into a linear form for mixdown and mastering.

# User-definable Workspaces (window layouts) help organizing your desktop. Create and save a separate workspace for each step of the production process. Switch Workspaces on the fly, as if working on multiple computers or monitors.

# Studio Connections “Total Recall” support (optional integration of Yamaha’s Studio Manager 2). The first step into a new dimension of software/hardware integration. This modular editing system builds a powerful bridge between the virtual and physical studio. Opening a project can recall an entire studio setup within seconds.

# New part-based Volume Envelopes for direct control of dynamics. Fix level problems on the fly without wasting automation tracks. Then move events with their volume envelopes.