Moog Music announces a new way to store, organize, compile and create Voyager presets — the Minimoog Voyager Editor-Librarian Software. This amazing new software includes all the functions contained in a Voyager preset on one screen. The Editor’s multi-functional easy-to-use interfaces allow users to create and interact with their Voyager like never before.


Designed to be the ultimate tool for managing and creating presets for the Minimoog Voyager, functions include: high resolution controls for creating precise adjustments to your presets, a radical GENETICS function for mutation and morphing of presets, and the LIBRARIAN function which allows the storing of a virtually unlimited number of presets, in user defined categories. Through a MIDI connection, you can pull or replace single presets or the entire bank of presets from the Voyager to your computer for storage or editing. Writing presets to your Voyager’s memory from your computer is as easy as a click of your mouse. 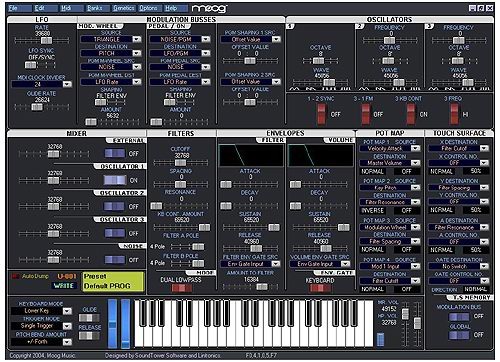 Once presets for the Minimoog Voyager are in the computer all parameters are displayed on the graphical user interface, including EDIT mode functions like Pot Mapping, Touch Surface Destinations and Filter Poles.


GENETICS is a tool used for automatic generation of Voyager presets. Presets can be created randomly, or can be created as the CHILDREN of two PARENTS presets. A user can select Morph, Mutate, Randomize, or Mix to generate a bank of presets from the Parents. The outcome is a fast and fun way to create unique and interesting sounds.Also a great tool to aid in preparation and organization for the gigging musician; the Editor allows users to add a library in user-named categories for creating custom preset banks. The icing on the cake is a Voyager OS update function to simplify the updating of the Voyager’s firmware. With increased versatility in customizing and organizing presets for your Minimoog Voyager, Moog’s new Editor-Librarian is sure to take you on the voyage of a lifetime!


The Minimoog Voyager Editor-Librarian Software requires a Mac or PC computer with a MIDI interface, and is available as a download from www.moogmusic.com only at a price of $79.00.