As announced in january Cycling ’74 has released the MODE plugin set for Windows and has started shipping the set at an reduced price of $99 (euro 77). At the Cycling ’74 website a demo version is available for download. 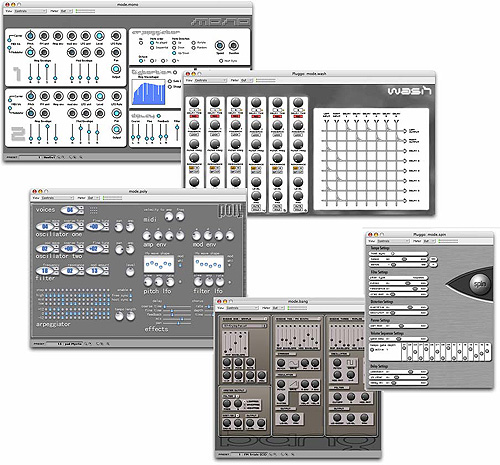 
Developed by the CreativeSynth team, the Mode plug-ins are unlike anything you’ve heard–deep basses, soaring lead lines and bizarre percussion, processed by synchronized effects and even a looper’s paradise of delay lines.

Visit www.cycling74.com for the demo download and additional information or check out our MODE product page (link below).

* FL Studio no longer requires “Use fixed size buffers” option to be on (XP).

* Demo tone no longer sounds when plugconfig is not used in a patch.

* Prevent crash (or running) when pluggo is loaded into a shell plug-in in vst.

* Fix pluggo UI window not activating when clicked inside in FL Studio (XP).

* New “latency” message to plugconfig, allows you to specify delay of plug-in which is reported to host (currently VST and RTAS only).