Minimonsta Release Delay – an apology. Due to an unforeseen technical problem (or two) with the installers GMEDIA regrets that they are unable to release the Minimonsta today as previously announced. They are working to resolve these issues as quickly as possible, but to be on the safe side, and to avoid further disappointment, they have rescheduled the release for 15th March 2005. 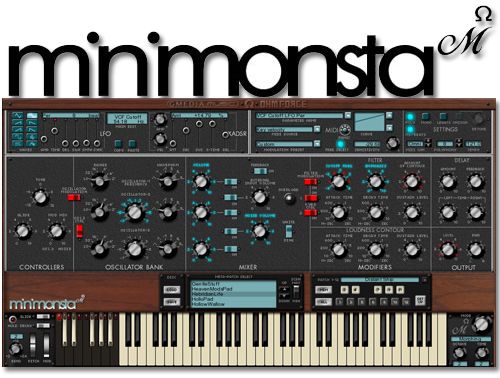 The Minimonsta from GForce (GMedia) is an expert emulation of the classic Minimoog that was at the forefront of the analog synth revolution and made famous by artists like Jan Hammer, Rick Wakeman, Keith Emerson, Chick Corea, Gary Numan and Kraftwerk. Every component of the triple-oscillator vintage synth has been faithfully modeled with stunning realism—and then some. The Minimonsta is fully programmable, ships with over 2500 presets and can even morph between presets within a bank for unprecedented control. There’s also an additional LFO and ADSR that can be applied to just about any parameter, as well as delay. You can even play the Minimonsta in monophonic, polyphonic or unison modes. This true players’ instrument runs as a stand-alone application (Mac/PC) or as a plug-in for most popular host applications.

For more information visit www.gmediamusic.com or check out our Minimonsta product page (link below).