Building on the acclaimed The Grand VSTi, the new version offers numerous new features and capabilities. The Grand 2 features an entire, new grand piano model, painstakingly sampled from a real concert grand made by one of the world’s leading manufacturers. Users can easily switch between the two models with only a single mouse click. Added key click and pedal sounds as well as hammer samples further increase the level of realism offered. The unique new four-channel surround implementation allows The Grand 2 to be placed anywhere inside a virtual room, with the position adjustable from directly within the VSTi’s user interface. 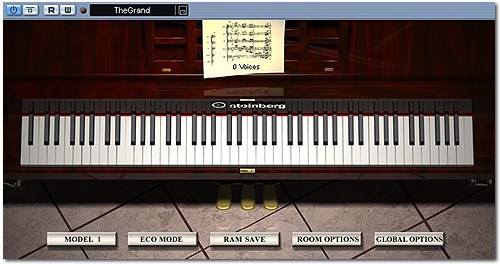 Further new features enhance the resource efficiency of The Grand 2. Incorporated into The Grand 2 is the RAMSave™ technology first seen in Steinberg’s HALion 3 virtual sampler VSTi, which allows for highly efficient use of the host computer’s RAM by allowing the “freezing” of the instrument and automatically unloading unneeded samples from memory. While the general disk streaming performance has also been enhanced in the new version, the new “Eco” mode can further reduce demands on the computer’s resources, freeing up power for other processing tasks.


The Grand 2 supports all major plug-in formats such as VST, DXi, and AU. ReWire support offers easy integration into Pro Tools®, while the standalone version allows The Grand 2 to be used without a host application.

The Grand 2 will be available for EU €239 from May 2005. Existing customers can update to the new The Grand 2 version for EU €89. For more information please visit www.steinberg.net or check out our ‘The Grand 2’ product page (link below).