TASCAM is pleased to announce Version 3.10, a free upgrade to the GigaStudio 3 sampling software, adding many features and functions and increasing the functionality of this already-powerful sampling package. GigaStudio version 3.10 adds new iMIDI templates, making it easier to use iMIDI rules for adding life to instrument sounds, and a host of new iMIDI rules and features. The Stack Instrument Selection feature allows you to quickly assign keyswitches to swap sounds on a MIDI channel during a performance effectively shattering previous limits on the number of Dimensions possible. Version 3.10 also adds drag & drop creation of GigaPulse presets, user interface enhancements, new comprehensive keyboard shortcuts and a list of other improvements designed to improve your workflow in GigaStudio. The release will be available for download at www.tascamgiga.com in early June. 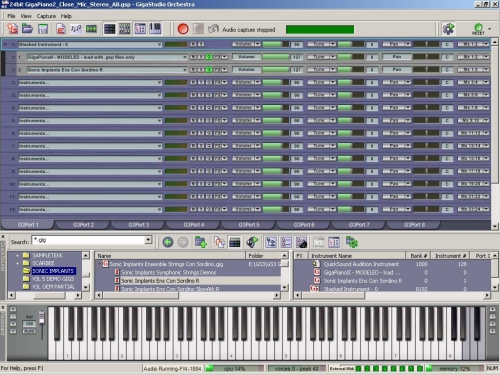 “Updating GigaStudio is a constant process, based on feedback from the top composers, library developers and engineers in the music industry,” says Pete Snell, GigaStudio Sales and Marketing Manager.

“Many of the new features in GigaStudio 3.10 were suggested by our library developers. They have a great idea for a new GigaStudio instrument and ask us to implement that feature, like our own new Legato mode that uses GigaPulse to model connecting notes. By working with the best sampler developers, we make sure that the best sample libraries in the world continue to be developed for GigaStudio.”

• iMIDI Templates: GigaStudio v3.10 now supports the use of templates to facilitate loading/saving iMIDI rules. A template is a user/developer-configured rule that can be quickly loaded into the sampler and attached to an instrument or a stack.

Stack Instrument Selection Feature: This feature can extend the playing capabilities of the sampler by allowing an unlimited number of samples to be assigned to a note range

Key Re-Mapping for Stack Instruments: Keyboard re-mapping can be applied at the Port/Channel level for quickly re-mapping input notes to samples as is often needed with drum controllers.

Naming Stack Instruments: It is now possible to name stack instruments so they can be easily identified, even when the stack view is collapsed.

Zone Limit for Stack Instruments: This powerful little feature allows the user to remove overlaps between instruments that are used together on a stack.

It is now possible to enter parameter values directly as text.