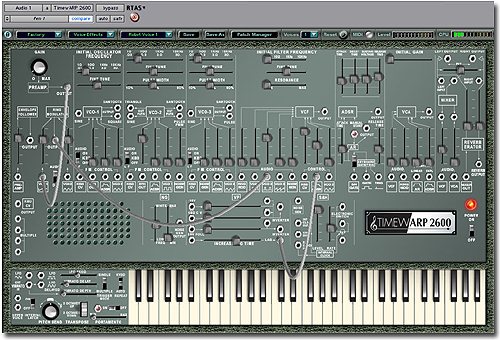 The TimewARP 2600 is the only ARP 2600 emulation endorsed by the creator of the original instrument, Alan R. Pearlman, who provided input and comments during the product’s design. “The TimewARP 2600 is an important evolutionary step in analog synthesis,” says Pearlman. “Way Out Ware’s software package not only makes analog synthesis affordable, but also opens the way toward continuing evolution of functionality.”

The presence of an audio input on the TimewARP 2600 also makes it a unique signal processing effect. Effects such as a one-of-a-kind vocoder can be realized by routing a track or live mic or instrument input from an audio interface to TimewARP’s audio input for use an oscillator, LFO modulator, control voltage and so forth. (Pete Townsend used this ability to drive the guitar sound in The Who’s “Who Are You.”)

TimewARP 2600 integrates seamlessly with most popular host applications on Mac and PC via RTAS, VST and Audio Units implementation. It also functions in standalone mode for use with a controller live or in the studio. Under MIDI control, the internal clock can synchronize to MIDI Beat Clock for LFO and triggered effects that match the beat of a session.