FabFilter has released version 1.11 of the FabFilter Volcano filter effect plug-in, and version 3.02 of the FabFilter One synthesizer plug-in. These updates are free for existing users and contain small enhancements and bug fixes. 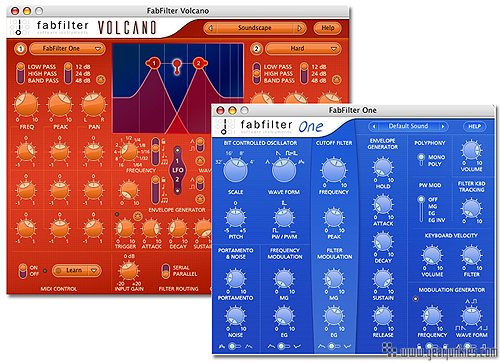 FabFilter Volcano version 1.11 fixes possible internal overflows that could occur with certain combinations of settings and input sounds. These overflows would result in extreme CPU spikes. The Clean preset has been changed to reduce distortion with loud input sounds, but it is still not intended to be completely transparent. Originally released in May 2005, FabFilter Volcano is a versatile filter effect plug-in for Windows and Mac OS X. FabFilter Volcano stands out with many modulation options and above all FabFilter’s unique digital filter technology that results in extremely smooth and analog-sounding filters.

FabFilter One version 3.02 fixes problems with preset automation in Logic and with loading presets in the VST Mac OS X version. Compatibility with Ableton Live has been improved as well. Originally released in 2004, the FabFilter One synthesizer plug-in for Windows and Mac OS X focuses on the best possible sound and filter quality. FabFilter One’s filter sounds raw but never cheap or ‘digital’, even at full resonance.