The VESTAX QFO LE , a new revolutionary turntable model has broken the barriers of the common DJ set-up, of mixer in the middle with turntables on each side. A new form of musical expression is captured with the turntable centered with mixer functions encompassing the unit, allowing the user to procreate sound and a new style. 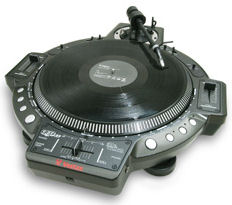 It has been said, ‘ONE MAN’ shall start history, and Q-BERT has been proving so. As a DJ, Q-BERT has taken the World by storm, from pioneer to innovator, using the turntable as an instrument. The time has come… Introducing and allowing people to play their music with passion and heart, to offer the user confidence and courage to play at their best, has been the pleasure for Vestax.

– 60% Pitch Control – A new style of pitch controlling is now possible thanks to the Spin Slide Pitch control. Sliding 180 degrees with a selection of 3 control modes and a variety of linked scrtach moves. It is also very important feature when you’re creating melodies with single note records.
– Shock Proof Detachable Fader – A conductive plastic PCV fader has been applied with a new shock absorbent technology called, Shock Proof method, securing supreme stability for the turntable.
– Monitor System – Unique stereo system that can select each PGM and MASTER with a 3 pointer lever switch. Rehearsal play can be performed without sending sound to the hall when MASTER is slected, and headphone jacks can be selected from a 1/4 inch headphone jack or a mini headphone jack.
– Reverse & Curve Switch for input and cross fader
– The 4 foot insulators can be detached easily and 2 belt hooks (not included) can be attached for playing the QFO by a strap.
– Designed to allow DJs the choice of their scratch hands and speedy access
– Digital scratching is now possible by mounting the TT-M1 on the QFO and connecting it to the CDX-05. With this new combination, music CDs and MP3s can be digitally scratched by using the QFO as an interface. Scratching like never before.