Cakewalk, developer of the leading music and sound software for Windows, announces Dimension Pro, Cakewalks first simultaneous Mac/PC virtual instrument release. Dimension Pro has a $359.00 (MSRP), about 300 Euro, and will be available at select music and sound retailers around the world November 2005.

First released as an integral part of Project5 Version 2 in April of this year, Dimension is a critically acclaimed synthesizer that combines real instruments with advanced synthesis, giving you endless sound possibilities. For Dimension Pro, Cakewalk has added a two DVD sound library. The immense sound library that ships with Dimension Pro makes it the ideal go-to instrument for preset addicts, while it’s deep editing and sound generation capabilities have a natural appeal to sound designers. 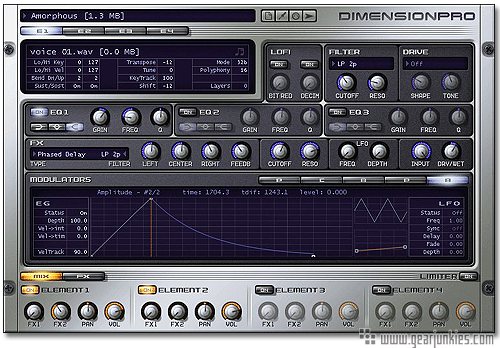 Dimension Pro offers an abundance of vital, usable sounds that range from pristine realistic acoustic instruments, thumping basses, cutting leads, to complex, evolving atmospheres. This wide tonal range can be attributed to both advanced sample mapping and the physical modeling of components, such as piano body/damper simulation and speaker cabinets, along with a powerful sound-sculpting engine with analog sound generation that lets you mutate and recompose any sound you might imagine with flexible, graphical Envelope Generators, tempo-syncing LFOs, and vector mixing.

Advanced Synthesis Capabilities – Dimension Pro provides ample synthesis capabilities for the serious sound designer, or anyone who wants to take Dimension Pro’s sounds and make them their own. Waveguide generators and wavetable oscillators generate analog-style sounds; each program provides up to 20 graphical Envelope Generators for intuitive yet precise control of your sound envelopes; 20 host tempo-syncing LFOs per program, each with 21 shapes, ensure musically useful modulation over all parameters.

Expressive Sound – Dimension Pro offers a wide array of expressive features that bring out the nuances of each sound program, making it a joy to play. These features include: multiple velocity and keyboard switching and crossfading; advanced and unique sample playback techniques, multi-looping, sample switching, and legato on MIDI Continuous Controllers; enhanced acoustic simulation is achieved via physical modeling components, such as piano body/damper simulation.

Geared for Performance – Dimension Pro’s MIDI Control Matrix lets you map MIDI controllers to all of Dimension Pro’s functions in a manner useful for live performance, allowing you to control modulation depth and smoothness. A Vector Mixer, which can be controlled by mouse or MIDI, lets you morph sounds by gliding between the different elements of a program.