PDAudio is our replacement for portable DAT recorders. PDAudio records two channels of 24-bit/192 Kilosamples/second uncompressed digital audio to compact flash memory cards and hard disks. The entire system fits in your hand and there’s nothing else like it in the world. 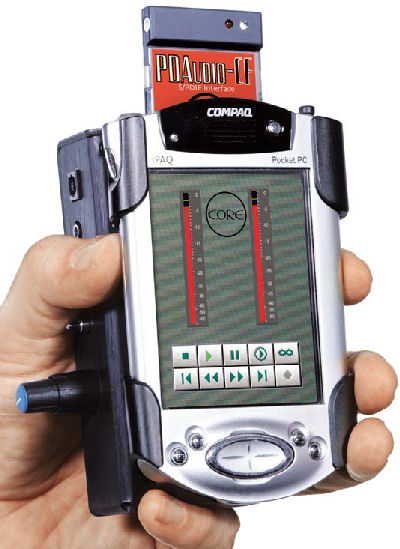 Core Sound has developed a solid-state replacement for portable DAT recorders. It records at better-than-CD resolution: up to 24-bit words at sampling rates up to 192 KS/s. It runs on a variety of computer hosts: PocketPC PDAs, and laptop and desktop PCs running Windows 2000, XP, or Linux. Rather than being a single piece of hardware, it is a system of inexpensive hardware and software components you can select among to assemble a very compact recorder that meets your needs. The whole system is called PDAudio.

The centerpiece of the PDAudio system is PDAudio-CF, a Type I (extended) Compact Flash S/PDIF interface with optical and coaxial inputs. PDAudio-CF can be mounted in PDA hosts that run Windows CE/PocketPC 2002/PocketPC 2003 or Linux (such as HP/Compaq’s iPAQ), or used with laptop and desktop computers running Linux, Windows 2000 or Windows XP.

At 96 KS/s PDAudio-CF draws only 45 mA and so has minimal impact on your PDA’s operating time per battery charge. (Various models of iPAQs are available with 1000, 1400 and 2200 mAh battery packs, and some of the CF/PC Card expansion packs provide still more battery capacity).

It has two LED indicators, both under software control. One is typically used to indicate that it’s seeing a valid S/PDIF data stream and the other to indicate other record system status. Both LEDs can be flashed at various rates to signal sample rate, media-fullness warnings and other information.

PDAudio-CF will accept digital audio data from a wide variety of outboard units, essentially any device that uses an S/PDIF coaxial or optical interface. These include microphone pre-amplifiers/A-to-D convertors (e.g., our Mic2496, Lunatec’s V3, M-Audio’s Duo), CD players/recorders, DAT players/recorders, hard disk recorders (like the Alesis Masterlink), and digital PC & Mac sound cards. Input is via a 3.5mm (1/8-inch) jack for both optical and coaxial S/PDIF input, selectable via software.

In a laptop/desktop-based recorder, PDAudio-CF will provide a bit-for-bit accurate S/PDIF interface at up to 192 KS/s for use with most popular audio software applications including Adobe Audition (formerly know as Cool Edit Pro), Sonic Foundry Sound Forge and Vegas, and Steinberg WaveLab. A WDM driver for Windows XP (SP1 with DirectX 9.x) and Windows 2000 is now available for download here (see the “Downloads” section below).

PDAudio-CF can also accept other IEC-60958 compliant data formats including DTS, AC-3 and MP3 data streams. It’s up to the software recording application to use this capability. This means that with the right software and front-end processors, you could do surround sound recordings with PDAudio-CF.

PDAudio-CF is for input only; it does not have a digital output.

The whole system will cost you arround $ 1200