Download Your FREE LMC-1 Plug-In NOW – Every now and again a piece of audio equipment comes along that defines the sound of an era. Back in 1979 Solid State Logic gave birth to a legendary recording console. The SSL SL 4000E Master Studio System forever changed how records would be recorded and mixed, heralding a new age in popular music. In less than three years, every major studio worldwide featured at a least one room with an SSL E Series console.

Now you can experience the Listen Mic Compressor within the comfort of your own workstation software and see what sounds it’ll lead you to create. If you discover something really great – like a radical new distorted oboe sound then be sure to let us know. 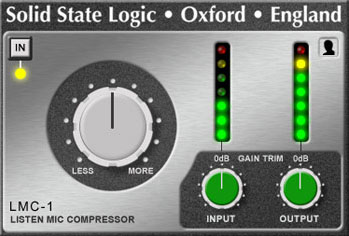 Register and download your FREE LMC-1 NOW! Technical information: LMC-1 is available for Mac only in AU and VST formats.