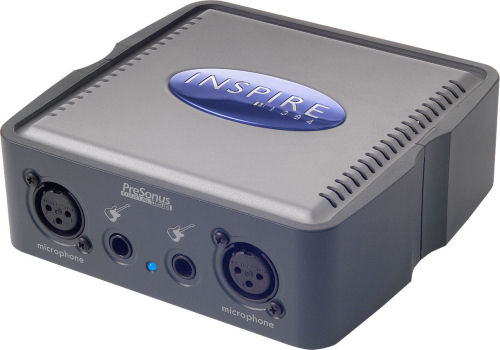 What’s Inside
The INSPIRE 1394 is loaded with state of the art components and technology enabling the easiest computer recording experience ever. The INSPIRE 1394 installs effortlessly on both Windows XP and Macintosh-based computers and works seamlessly with virtually all popular recording software including Cubase, Nuendo, Sonar, Cakewalk, Logic, Logic Express, Digital Performer and many others. The microphone and instrument preamplifiers loaded in the INSPIRE 1394 are designed to deliver ultra-low noise, high gain preamplification for all types of microphones and instruments needed for professional quality recordings.

Ins and Outs
The front panel of the INSPIRE 1394 features two custom-designed PreSonus microphone preamplifiers with +48V phantom power and two instrument Hi-Z inputs. The back of the INSPIRE features selectable line or phono (with RIAA filter) inputs great for all types of keyboards, samplers, drum machines and turntables. Outputs on the INSPIRE 1394 include RCA unbalanced and mini TRS jacks as well as headphone output.