RealGuitar 2.0 has been released. Built-in Pattern manager and a number of new unique features added to version 2.0 let you emulate guitar performance in even more realistic way while creating solo and accompaniment parts for your songs. 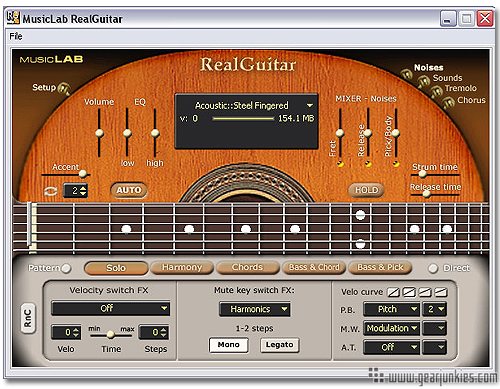 A number of new unique features added to version 2 let you emulate guitar performance in even more realistic way while creating solo and accompaniment parts for your songs.

Feature added to Chords mode:
* Number of Strings – now it is possible to also disable upper strings in a chord (similar to current version lower strings disabling), so you can play chords without 1st, 2nd, 3rd, etc. strings, i.e. reduce # of strings used for the chord up to any middle one

Features added to Chords, Bass&Chord, Bass&Pick modes:
* Slash Bass Chords – all chordal modes now have ‘/Bass’ option that allows to perform major/minor triads with any note in the bass (including its own III, V (and Root of course)). That adds 800 (!) more new chord voicings to 1000 available in version 1.5
* Legato Chords – allows to sustain note(s) on chord change if the same note(s)/string/fret is being triggered in the previous chord.