Digidesign is pleased to announce the D-Show 2.0 software upgrade for the VENUE live sound environment. 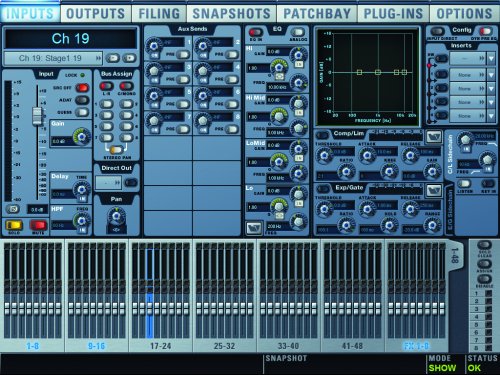 Since its introduction just over a year ago, VENUEs adoption in all fields of sound reinforcement has been spectacular. In 2005, the system was used on three out of Pollstar¹s top 10 revenue grossing tours, commented Digidesign live sound market segment manager Robert Scovill. ³The combination of great sound quality, proven reliability, TDM plug-in support and direct connection to industry-standard Pro Tools® workstations make it a powerful mixing solution. With D-Show 2.0 software and the new DSI and DSO cards, the system just keeps gaining in strength ‹ much of it thanks to significant workflow enhancements and feedback weve received from our users.

Snapshot Preview Mode enables operators to take the D-Show console offline from the audio mix and create, modify, manage, store, and view snapshots in their entirety without affecting the currently active mix useful for building cues during a rehearsal or performance and for configuring the console for an upcoming act in a multi-band festival.

Recall Safe allows operators to filter the recall of any parameter on any channel or output on a per-scene basis using scope sets, allowing for real-time adjustments without losing changes with a subsequent snapshot recall.

Absolute and Relative Edit Mode enables engineers to make changes to individual controls on the console quickly and apply those changes in an absolute or relative fashion across multiple snapshots without affecting other snapshot data.

Enhanced Propagate Mode makes it even easier than before to capture parameter changes after the fact and apply them to one or more snapshots.

Split Fader Banking and Encoder Control enable faders and encoders between the Main Unit and Sidecar(s) to operate independently which allows users to leave key channels available on one unit while banking channels on another. This has the added benefit of allowing multiple users to operate encoders on different banks of the same console simultaneously.

Channel Strip Copy/Paste enables operators to copy an entire channel or output and paste it to any desired location, accelerating setup.

New signal routing options increase the VENUE systems flexibility. Operators can now drive plug-ins from Direct Outputs (these appear as input assignments in the Plug-in menu), which can dramatically free up the need for auxiliary effects buses by allowing the user to build numerous variable level parallel processing paths from a single direct output.

Stereo Linking/Unlinking of adjacent inputs to the Matrix/PQ enables user to discretely control the left and right side of any source ­ including Mains LR – feeding a mono Matrix or stereo Personal mix.

Monitor outputs in the D-Show patchbay allows operators to patch audio digitally from the monitor (solo) bus to physical outputs, as well as to plug-ins.

The D-Show 2.0 software upgrade retails for $149 and will be available directly from Digidesign Customer Service Administration (CSA) or from authorized VENUE dealers. Customers must provide the serial number of their FOH Rack to qualify for the upgrade. Customers who purchased a VENUE console on or after January 1, 2006 qualify for a free upgrade.