Attention Ableton Live users! The Novation ReMOTE SL keyboard has just been updated to become the ultimate hardware controller for Live 5! And with this free software update comes complete compatibility for Cubase and Logic users too. 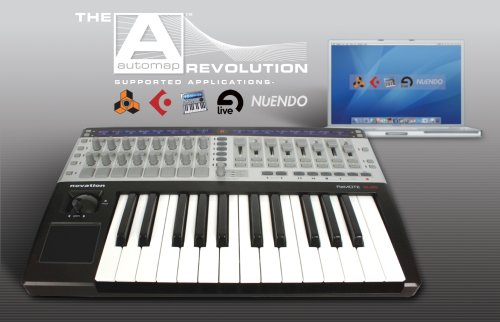 Great news for Ableton Live 5 owners – no more messing about with substandard hardware controllers because Novation’s ReMOTE SL keyboards can now do all of the hard work for you! Compatibility with Live 5 is just one of the features within the latest software update for the award-winning ReMOTE SL. Now, with an SL keyboard connected, you can have total, hands-on control over a session in Live 5. The Mixer and Transport controls are immediately available, with every effect and plug-in mapping automatically to the ReMOTE’s controls when clicked on screen.

There’s good news for Cubase and Logic users too as the same software installer (which can be downloaded free from the downloads page of the Novation website) also features version 2 Automapping for Apple Logic 7 and Steinberg Cubase SL/SX 3. This means that both applications now have full mixer and instrument support.

The Detail
Ableton Live 5 With Live 5, the right-hand side of the SL fascia can be used to control the mixer functions with the LCD above showing track names, volume, pan and send data. The top buttons can be used to punch tracks in and out, while the bottom ones are used to arm tracks for recording. For instruments and effects, as soon as you select a device in Live’s GUI, it will automatically map to controls on the left side of the SL.

The LCD details which parameter is mapped to which control. The remaining buttons, knobs and trigger pads are used for navigating around the Ableton grid or are available as free assigns.

Apple Logic 7
Version 2 of Logic’s Automapping has dual modes to control plug-in instruments and Logic’s mixer. In Mixer Mode the sliders control track levels with the buttons below selecting solos and mutes. The left side of the SL controls panning, record arming, sends and track selects. The scroll up/down buttons to the right of the screens move between banks
of tracks. In Instrument Mode, these scroll buttons select individual MIDI tracks, choosing which instrument or effect to control. The device’s parameters are then automatically mapped to the SL’s controls with each parameter clearly displayed on the SL’s giant screens.

Cubase SX/SL 3
As with Logic, Automapping in Cubase has two modes: Instrument and Mixer. The first turns the ReMOTE SL into a generic VST control surface with its sliders, encoders and pots mapping to each VST in the instrument rack with just one button press. In this mode, the parameters are assigned logically (Automaps for popular VSTs have all been created) so that switching between instruments and their various controls becomes second nature. In Mixer Mode, the SL’s sliders control track levels with the buttons below controlling mutes and solos.

In addition to these updates, the ReMOTE SL also Automaps with precision and style when connected to Reason 3 and Nuendo 3, with more applications on the way.

Price and availability
The latest SL Automapping installer is available now as a free download from www.novationmusic.com where you will also find more information and instructions.