Kjaerhus Audio has released the MPL-1 Mastering Precision Limiter, which is the first plug-in in a new series of mastering plug-ins. 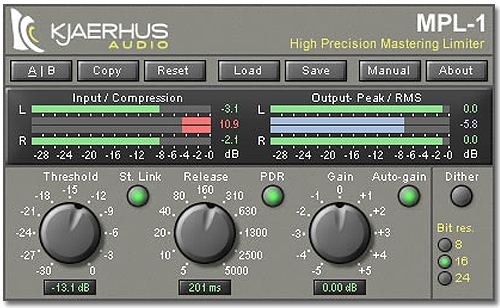 The Kjaerhus MPL-1 is a limiter plug-in made for mastering and other purposes where the highest accuracy and quality are demanded. The MPL-1 uses an over-sampled peak detecting algorithm to ensure that even high frequency peaks are accurately detected. This results in better high-frequency performance and ensures that no overshoot or clipping occurs in the final D/A conversion. Look-ahead and release-smoothing (soft release-hold) assist in keeping the compression smooth and transparent, even at high compression levels.

The MPL-1 uses a new stereo linking technique that allows peaks to be limited individually on each channel, while longer lasting gain reductions are linked. This technique ensures that peaks in one channel do not produce artifacts in the other channel, while the average compression still remains the same in each channel to avoid disturbances in the stereo balance. A PDR (Program Dependent Release) function is available to minimize pumping effect and increase loudness. The MPL-1 also offers TPDF-Dithering for 8, 16 and 24 bit output resolution. Four stereo meters show the peak input- and output levels as well as compression and RMS-output.