OtiumFX is proud to present SONITEX, a VST effect plug-in for Windows that offers a complete suite of processing dedicated to adding texture to digital audio. 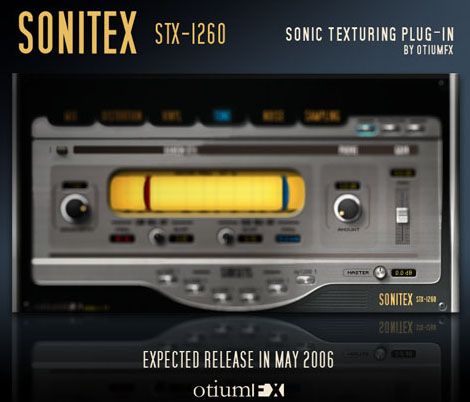 When working in a controlled MIDI-based production environment, musicians with experience in vintage hardware samplers and vinyl crate digging often miss the “gritty feel” and “sonic texture” you get from sampling vinyl records – Sonitex aims to introduce the old vibe to the modern DAW.

The concept
Sonitex is built on the idea that “texture” and “grit” is not a single effect such as noise or bit-reduction. Rather, it is the cumulative result of every process a piece of music goes through as well as the interaction of these. So instead of focusing on just a single effect, Sonitex focuses on the complete life span of a piece of music before it ends up in a contemporary track.

The obvious application for Sonitex is to make homemade breaks & loops sound like they originate from a rare seventies record. But the flexible controls make it just as useful for sound sculpturing and creative effects.

– Price & availability:
SONITEX STX-1260 is planned for release in May 2006, as a VST plug-in format for Windows. It is expected to cost $49, and will be available for purchase through the otiumFX online shop.