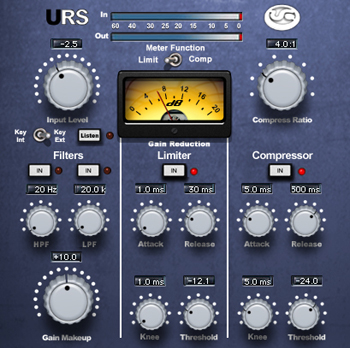 Two different URS 1975 Classic Compressor plug-ins are included:
1. Compressor/Limiter/Side Chain version, with a modern “Brick Wall Limiter” that was not found on the vintage unit.
2. Compressor Only version, which is 3x more DSP efficient. It will act as a Limiter when the ratio is set at 10:1 and above.

The Compressor and Limiter sections are totally independent of each other. Both feature separate variable Attack, Release and Threshold controls. The Internal Side Chain High and Low Pass Filters fine tune how narrow or “Broad Band” the URS 1975 Classic Compressor will affect the program material. Both Filters completely overlap to dial in problem frequencies. The Listen Key is after the Filters section. This allows you to monitor the signal being sent to the Gain Reduction detection circuit.

The 1975 Classic Console Compressor is currently available in TDM and RTAS formats for Pro Tools. Native VST and AU versions for Windows and Mac OS X will be released soon.