Where other piano libraries offer a fixed piano sound that may or may not suit an individual’s project, Reason Pianos were recorded using multiple microphones, leaving the mixing and shaping of the piano sound to the user. A large selection of Combinator presets ranging from basic microphone setups to wide multi-mic patches guarantee absolute sonic control and the flexibility to change the piano, mics and recording setup in the mix. 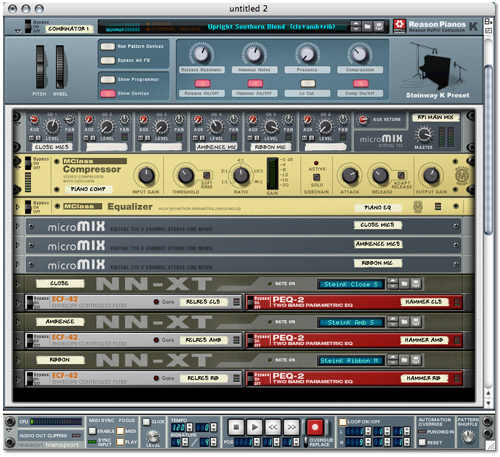 The Pianos – Reason Pianos features a Steinway D grand piano, a Yamaha C7 grand piano and a Steinway K upright piano, each selected for its distinctive pop music feel. The Steinway grand is considered to be the world’s finest grand piano, the Yamaha C7 is a classic rock and jazz piano with a distinctive sound, and the Steinway upright is a well balanced upright known for its deep tone. The hand-selected instruments were tuned and adjusted to perfection.

The Pianos in the Mix – The Piano with its wide tonal range and broad frequency spectrum is a notoriously tricky instrument to handle in a mix. Not any more. Each of the four stereo pairs and two separate mono microphones used to record the pianos show up as individual channels in Reason’s mixer, enabling the user to tailor the piano sound to suit the other elements in a song. For example, the mono ribbon mic signal alone might be perfect for a busy track, or the floor microphones can be brought up a notch to boost the bass. Additionally there are EQ, compression and other effects for the individual mics as well as front-panel controls for hammer noise, presence and release.

About Hypersampling – The three pianos reproduced in the Reason Pianos ReFill were recorded in large, hardwood floored recording rooms, the perfect environment for pop piano recordings. To capture every aspect of the pianos’ sounds – from resonance in the room to their unique timbres – each was recorded at multiple velocity levels from multiple angles using six different sets of microphones. A quality blend of vintage and modern day technology was used throughout the recording process, for a warm yet crystal clear sound.

Philosophy Behind the Library – The Reason Pianos ReFill does not seek to deliver a set of clinically perfect, scientifically reproduced concert pianos. Rather, these are pianos to play, highly responsive instruments that simply sound good – without filling up hard drives, chewing up RAM, or depleting CPU resources. The pianos are set up ready to go for production with 42 preset patches. In addition, 29 “style” patches are included for tweaky, layered, processed pianos that mimic many classic sounds.

The Reason Pianos ReFill will be available at Propellerheads’ Dealers on August 15, 2006 worldwide or directly from Propellerheads Software at for a MSRP of US$129/EUR120.